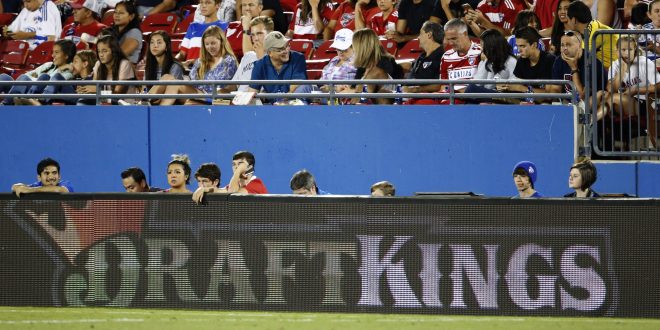 Has Fantasy Football Grown Too Large?

Fear, doubt, disappointment and elation— these are the range of emotions experienced by a fantasy football player on any Sunday from September to January.

The game, played by assembling a team of professional football players and being awarded points based on their performance, has recently swept the nation, capturing the attention of both die-hard football fans and the casual watcher. In 2015 there were an estimated 51.8 million fantasy football players, according to the Fantasy Sports Trade Association.

Is there a hurricane in buffalo or something? Palmer 2-10 for 8 yds? I need Larry!!! #FantasyFootball

This rapidly growing industry has had huge implications on the National Football League and its viewership. Eric Esterline, a professor in sports management at the University of Florida, said that the relationship has mutual benefits.

“It (fantasy football) has affected viewership greatly over the last 15 years,” Esterline said, “and you can see it reflected in the growth in advertising.”

Fantasy football has come a long way from a game once played by die-hard football fans based on statistics they found in newspapers. In its current state, it is a game played by all kinds of fans on a number of digital platforms with multimedia advertisements, phone apps and competitions where participants can be awarded thousands of dollars in prizes.

After its rise to prominence, some may wonder if fantasy football has superseded the game it is based off. For David Kim, a third-year biology major, it has.

“My fantasy football app wasn’t working over the weekend, and my immediate reaction was that now I have to watch football for fun,” Kim said.

Kim’s line of thinking isn’t unusual. He and many others have been drawn to fantasy football because of the opportunity for competition.

“I definitely wouldn’t have the interest I have now (in football) if it weren’t for my fantasy league,” Kim said.

Kim is one of many college students who play fantasy sports, with the number growing with every new season. Companies are noticing this, with Direct TV offering special deals to college students for their NFL Sunday Ticket package. The package is popular among fantasy football players, as it allows viewers to watch every live game.

Esterline, who plays fantasy football, has also noticed the popularity among his students.

“I’ve never done a poll in class, but I’d say about 90 percent of my students play fantasy sports with most of them playing (fantasy) football,” Esterline said.

Typical fantasy football leagues involve players competing among themselves for bragging rights and sometimes for cash prizes. This has changed recently with the introduction of daily fantasy sports to the mainstream.

The daily fantasy sports platform revolves around players paying entry fees to enter competitions to win money. In addition to this, the competitions are daily or weekly, depending on the sport, which is different from traditional fantasy sports that last the duration of the sport’s season. According to Forbes, daily fantasy sites will generate revenue in the billions because of player entry fees.

While it has drawn comparisons to internet gambling, which is illegal, daily fantasy sports companies are allowed to operate because fantasy sports aren’t considered to be similar to games like poker or blackjack. This does not mean that these companies have avoided legal issues.

Daily fantasy had its biggest presence last football season with constant advertisements during all football games, both college and professional alike. They targeted college students by hosting college football tournaments where students could pick players from their school and others to win prize money.

The underlying question is what does this mean going forward for the NFL and fans of teams. Attention is good, but what if it is going to the wrong places?

“It’s different if you and your friends get together to make a league and make friendly bets,” Meany said. “I think that daily fantasy sports take that friendly competition out of it and makes it all about money.”

Meany can’t, however, deny the popularity of the daily fantasy sports sites.

“I’ve seen a lot of people in class on DraftKings or Fanduel,” Meany said, “probably more than I see on normal sites like ESPN or Yahoo.