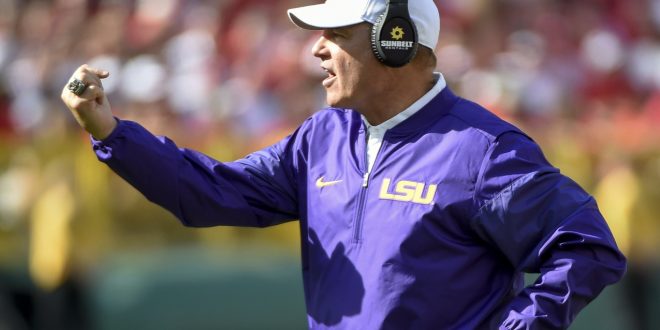 The Les Miles Era is over at LSU.

Despite Miles’ ability to build a winning program, claiming two SEC titles and a national championship during his time at LSU, he was let go four games into the 2016 season. Miles is the second-winningest coach in program history and grouped along with only four other Southeastern Conference coaches (Bear Bryant, Philip Fulmer & Steve Spurrier) to win more than eight games for 11 straight seasons.

But LSU, which is generally regarded as a football powerhouse, didn’t reach expectations many fans and administrators placed on the program.  Last season, there was speculation Miles job was in question after a three-game losing streak in November. A win against Texas A&M turned the situation around, as well as the Tigers dominating Texas Tech in the Texas Bowl.

In a press release on the LSU Tigers Athletics official site, Vice Chancellor and Director of Athletics Joe Alleva discussed the dismissal of Miles.

“It’s apparent in evaluating the program through the first month of the season that a change has to be made. Our commitment to excellence and competing at the highest level is unwavering, and our goals for the remainder of this season haven’t changed. We have an obligation to our student-athletes to put them in the best position to have success on the football field each week and we have great confidence that coach Orgeron will do just that.”

As for Orgeron,  he has found himself in a similar situation before. He was the interim head coach for the University of Southern California in 2013, where he finished out the season with a 6-2 record.

Miles was not only known for winning but for colorful commentary and quirky traditions like chewing on blades of grass from the field at Tiger Stadium.

Leonard Fournette, the Tigers’ star running back and NFL prospect, said the team’s job now is to stay focused.

Other players have tweeted out their high regard for Miles. Running back Nick Broussette tweeted he couldn’t believe the news and that “the main reason I came to LSU is coach Miles.”

Nothing but Love for him

The news followed LSU’s 18-13 loss to Auburn on Saturday. It looked as though LSU pulled out the win in the final seconds of the game, hustling to squeeze in one more play before the clock ran out.   An apparent winning touchdown pass was not allowed because officials ruled the clock, with one second left in the game, had started before the play was run. The Tigers now hold a 2-2 record this season.

As to where Les Miles will go and who will be his successor is up for discussion. LSU athletics is set to hold a press conference Monday at 12:30 p.m. to discuss the dismissal of Miles along with the promotion of Orgeron to interim head coach.