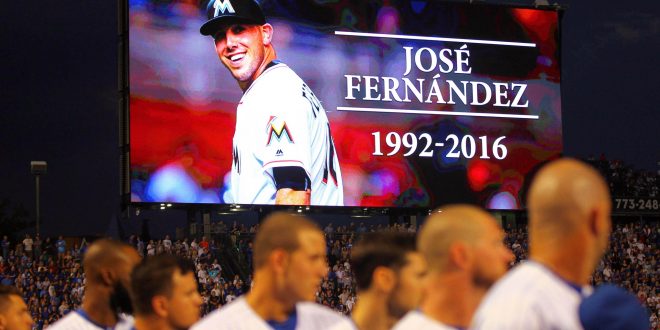 Miami Marlins young ace pitcher Jose Fernandez passed away early Sunday morning due to a boating accident on a Miami Beach shore. Fernandez and two of his friends were all found dead around three am Sunday morning when Coast Guard personnel found their 32 foot vessel upside down on a Miami Beach jetty. Speed does seem to be a factor in the accident due to the impact the jetty shows from the crash but officials believe Fernandez died of trauma and not drowning.

Jose Fernandez was only 24 years old and known across the Major League Baseball community as an upcoming star with a contagious smile.He had announced on Instagram last week that he and his girlfriend were expecting their first child.  The Marlins later announced at a press conference that their game against the Atlanta Braves was cancelled yesterday due to the devastating news. Fernandez’s jersey number “16” was painted on the mound of Marlins Park as teammates and coaches mourned the loss of their friend.

Fernandez was supposed to start today against the Mets. The Marlins announced they will stay play today’s game because “it is what Jose would have wanted.” First year manager of the Marlins Don Mattingly broke down in a news conference when he shared his memories of Fernandez and commented on his love for the game of baseball.

The loss of Fernandez was felt all across the sports world yesterday. The Miami Dolphins held a moment of silence before their game against the Cleveland Browns. The Tampa Bay Rays cancelled a pre-game ceremony that would have recognized Boston Red Sox retiring star David Ortiz, per his wishes. Instead the two teams joined in a moment of silence to honor their friend; Ortiz was shown breaking down in tears on the field during the moment of silence.

Marlins third baseman Martin Prado says today his team will play with a lot of pain.

@@ashlynrsullivan
Previous Les Miles Era At the LSU Ends
Next Has Fantasy Football Grown Too Large?

Fresh off a surprising run to the NBA Finals in the bubble last season, the …