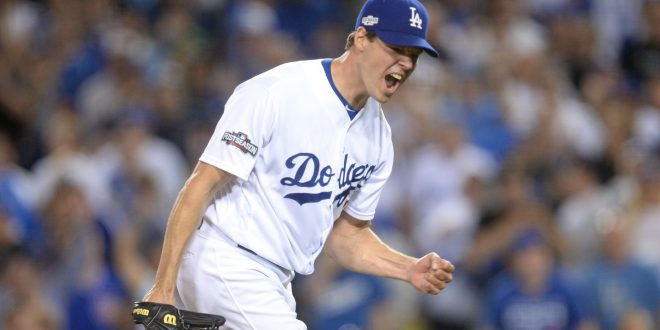 After a big league high of 103 wins in the regular season, the Chicago Cubs have dug themselves into a little hole heading into Game 4 of the National League Championship Series.

The Los Angeles Dodgers challenged the Cubs in all facets of the ball game and the Cubs just couldn’t answer falling short 6-0 in Game 3 of the series.

Just 15 months ago Dodgers pitcher, Rich Hill, was a long way from playing for an MLB team as he was pitching independent ball for the Long Island Ducks. Yet, that didn’t stop Hill from doing what he loved. Fifteen months later, Hill was called to the biggest moment of his career. A NLCS game head-to-head against his former team and former CY Young pitcher, Jake Arrieta.

The 36-year-old left hander kept the Cubs scoreless through six innings and only allowed two hits along with six strikeouts. Hill has only given up one run in 23 innings over four home starts, lowering his ERA to 0.39.

On the other hand, Jake Arrieta showed that he is human after all. Arrieta gave up four runs and six hits in five innings and was pulled after allowing three big scoring plays.

He allowed a line drive from Corey Seager that brought in Andrew Toles in the fourth inning and then a big two-run home run from Yasmani Grandal that put LA up 3-0. Then, he gave up an early home run in the sixth to Justin Turner before he was pulled.

Struggle for the Cubs

While the Los Angeles Dodgers offense has been hot, the Cubs offense has not. The Cubs have gone from an average five runs per game to 3.6 in the postseason with a .185 average.  The Cubs only managed two hits off of Hill, both of which were from Kris Bryant.

This is the first time the Cubs were shut out since May of 2014. Additionally, the 18 scoreless innings the Cubs have managed, marks the longest postseason drought in franchise history.  Manager, Joe Maddon, says that he knows his team has had enough preparation and that it is more of a mental thing at this point in the season.   It is the first time the Dodgers have had consecutive postseason shutouts and it couldn’t come at a better time.

For the first time in franchise history, the #Dodgers have thrown consecutive postseason shutouts. #LALovesOctober pic.twitter.com/jE1hVM0r4q

The next game will take place at Dodger Stadium tonight at 8 p.m. The game will feature two pitchers that have differing experience. The Cubs will start 37-year-old John Lackey, who has had a lot of experience in the major leagues. He pitched in Game 7 of the World Series back in 2004 for the Anaheim Angels and has been part of many big games.

He will face 20-year-old rookie Julio Urias. Urias will become the youngest pitcher to start a playoff game and has faced the Cubs twice this season, winning one and losing one.

Make sure to tune into ESPN Gainesville 95.3 at 7 p.m. to catch live coverage of the game.