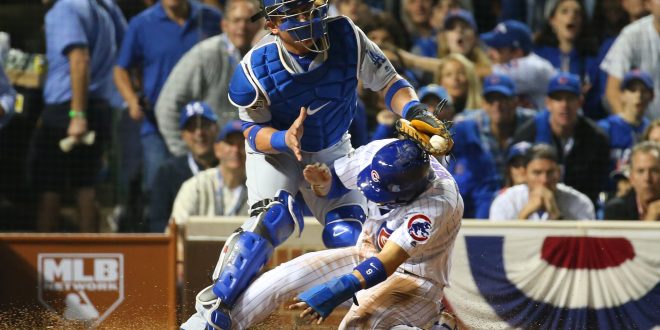 The series shifts from the “Windy City” to the “City of Angels” for Game 3 of the NLCS. The Chicago Cubs (103-58) are taking on the Los Angeles Dodgers (91-71) in a seven game series currently tied at one a piece.  After the Cubs dominated the Dodgers in Game 1, winning by a score of 8-4, the Dodgers responded in Game 2  by shutting out the Cubs at home for the first time since Babe Ruth’s Red Sox did so in 1918.  L.A. is set as the battleground for the next three games, in what could be the final destination for one of these teams.

The Cubs are coming to Los Angeles in hopes of taking control of the series if not outright ending it.  The last time the Cubs made an appearance in the World Series was 1945,  just a month after World War II ended.

Leading the Cubs to two consecutive NCLS appearances, Cubs Manager Joe Maddon will not be satisfied until they win the World Series.  Maddon will look to change things up coming into LA, including adjustments to the signals for stealing a base and personnel changes.   The Cubs have high hopes for the three-time manager of the year, as they hope he’ll be the one to end the infamous 108-year title drought.
Last year’s NL Cy Young Award Winner Jake Arrieta (18-8) will take the mound tonight for the Cubs.  After last year’s magical season falling just short, Arrieta believes they are more prepared this time around.  Arrieta has seen the Dodgers once already this season, shutting them out for seven innings with a total of eight strikeouts.  He will look to continue his success against the Dodgers tonight.

Without Kershaw on the mound, the Dodgers have been unable to find a way to win this postseason.  Looking to change that stat, former Cub Rich Hill (12-5) takes the mound later tonight.  Hill says playing the Cubs is like playing any other team for him. With only one prior appearance back in 2011, Hill pitched for two-thirds of an inning against the Cubs, registering two strikeouts and allowing one hit.

The Dodgers will have the home-field advantage but according to Hill, it’s all about execution.  Playing only two games from Dodger Stadium so far this postseason, the Dodgers have a split record of 1-1 at home.

Looking to end their postseason struggles,  both teams will be eager to prove they have what it takes to win the World Series. For one team the wait has lasted several decades, and for the other a century. Both teams can seize their opportunity to take a lead in the series tonight in Game 3.