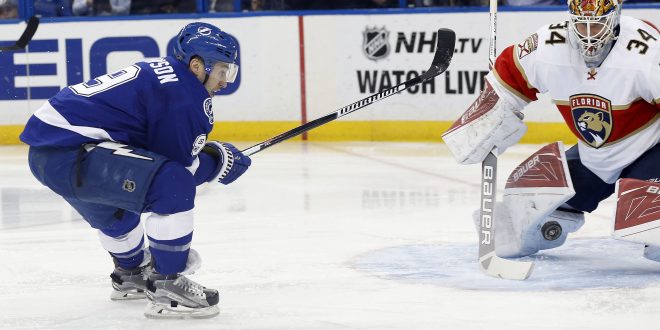 The Tampa Bay Lightning hosted the Florida Panthers at Amalie Arena on Tuesday night and earned a 4-3 victory after overcoming a call that went against them, but remained undefeated, keeping a perfect 3-0 record at the start of the season.

The first period was scoreless, but Florida was up on the scoreboard first in the second period.

Tampa came back nearly four minutes later. Alex Killorn scored his third goal of the season to tie up the game.

That goal gave the Lightning the momentum they needed. The Bolts grabbed the lead when Ondrej Palat scored a rebound goal after Steven Stamkos attempted to launch one in.

The Panthers took control in the third period. They tied it up with a goal from Vincent Trocheck.

The Cats took the lead once again after rookie Michael Matheson scored his first NHL goal. Florida was up 3-2.

The game was looking like a done deal and the Panthers would add a road win to their two-game streak, but Lightning star Stamkos did not let that one slide.

Stamkos forced the game into OT when he lifted a shot from along the goal line over Panthers goalie James Reimer with less than six seconds left in regulation.

Stamkos says he wasn’t exactly planning on that shot, but he just wanted to make a play where he would score.

Florida managed to survive a two-minute, 4-on-3 power play, sending the game into a shootout.

The shootout went for six rounds and Brayden Point finished it off when he buried the game-winner. Aaron Ekblad went on the Panthers’ next attempt, but was stopped by Ben Bishop.

The shootout had a little controversy. The Lightning thought they won the game when Trocheck lost the puck on his attempt before shooting, right before the goal line. Trocheck managed to get a hold of the puck and score. The shot was first ruled no-goal.

After a video review, the goal was good. According to Rule 24.2 “The puck must be kept in motion towards the opponents’s goal line and once it is shot, the play shall be considered complete.”

Reimer says the game against the Lightning was a good start and they will only get better.

Bishop made 28 saves against the Cats.

This is the fifth time the Lightning has opened the season with a 3-0 record.

Tampa head coach Jon Cooper says there aren’t many players like Stamkos who can make a play like that so late in the third period.

Florida returns home for a Thursday night game against the Washington Capitals and Tampa will complete its four-game home stand as they host the Colorado Avalanche.