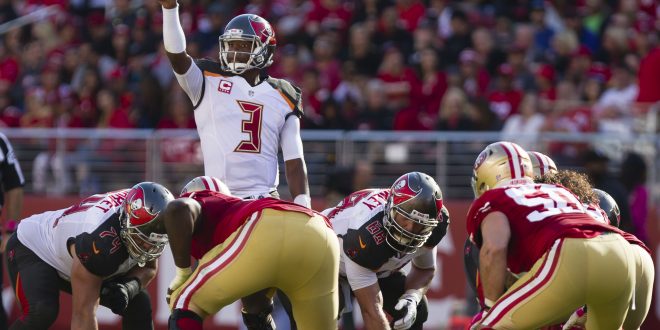 One of the key matchups in Week 8 of the NFL involves the Tampa Bay Buccaneers (3-3) taking on the Oakland Raiders(5-2) from Raymond James Stadium.

The Bucs are coming off a convincing 34-17 victory over the San Francisco 49ers at home in Week 7. Now winners of two straight, Tampa Bay will look to take advantage of the loss the Atlanta Falcons experienced in Seattle last week in order to gain some ground in the NFC South division. The Silver and Black meanwhile, are coming off a victory against another Florida-based team in the Jacksonville Jaguars. The Raiders beat the Jags on the road 33-16. The Raiders have had success on the road against East coast teams this season, and will look to continue that trend in Tampa Bay.

The Buccaneer offense and defense played exceptionally well last week against the 49ers. Jameis Winston had an efficient game, throwing  for three touchdown passes and just one interception. Former Texas A&M wide receiver Mike Evans was the recipient of two of Jameis Winston’s touchdown passes. Evans had 96 yards receiving as well. Recent signing Jacquizz Rodgers chipped in with 154 rushing yards for the Buccaneers, who are still without starting running back Doug Martin. The Tampa Bay defense forced three turnovers in the victory. The Bucs may be without defensive tackle Gerald McCoy, who suffered a calf injury this week. Head coach Dirk Koetter will hope for a repeat performance in all facets of the game this week at home against the Raiders.

As mentioned earlier, the Oakland Raiders have had much success away from home against east coast teams this season. They’ve beaten the Saints, Titans, Ravens, and just recently the Jaguars on the road. Jack Del Rio and the Raiders face a Bucs defense that is ranked in the top ten in total yards allowed.

Despite the defensive obstacle the Raiders will once again look to young star quarterback Derek Carr, who ranks sixth in the league in touchdown passes. Not unlike the Bucs and stud wide receiver Mike Evans, the Raiders have a young stud wide receiver in Amari Cooper. Cooper leads the team in receptions and yards receiving. Cooper will surely be looking to make his presence felt on the field against the Oakland secondary.

The Bucs will also have to look out for Ladarius Murray, who was instrumental in the Raider victory over the Jaguars with two rushing touchdowns. The Raiders defense will look to improve its efforts as well as they rank dead last in the NFL in terms of total defensive yards allowed.

Kickoff is set for 1 p.m. and will be aired on CBS.