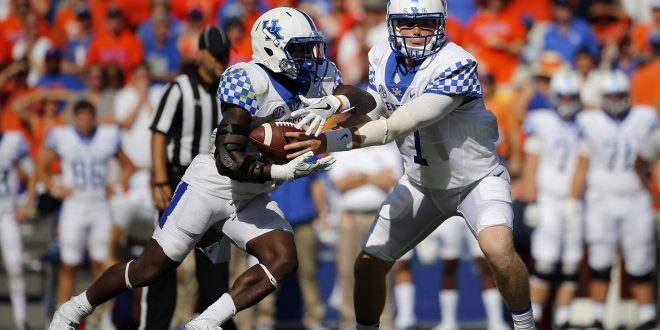 A streaking Kentucky team is getting ready to host Georgia on Saturday in a game the Wildcats hope continues propelling their improbable run at an SEC East title.

UK has looked dangerous, winning five of its last six games with their lone loss coming to No.1 Alabama. The Bulldogs, on the other hand, are trending in the wrong direction. After a pitiful showing in the annual Florida-Georgia game, UGA has dropped four of their last five games. An SEC East title is virtually impossible for a Dawg team once ranked 18th in the preseason.

Threat In The East

The SEC East, once owned by Tennessee earlier in the season, is now property of the Florida Gators. But while Gator fans have exhaled now that the Vols are no longer a threat, the Wildcats have come storming in. With a 4-2 record in the East, UK is second behind UF. The Wildcats, which are almost assuredly going to clinch a bowl game this season, are accomplishing rare things.

If Kentucky beats Georgia on Saturday, it will be only the 5th time in school history that UK has won at 5 or more SEC games

What needs to happen for UK to sit atop the division? For starters, they’ll need a little bit of help.

If Kentucky beats UGa and Vols, and if Florida loses at Arkansas and LSU, Wildcats are going to Atlanta. Likely? No. But it's the SEC East.

Kentucky plays Tennessee on the road after this week, their final SEC game of the season.

Georgia head coach Kirby Smart has lamented that inconsistency is the team’s weakness thus far. The O-line will show improvement one game but then the special teams falters. All the while freshman QB Jacob Eason still learns to adjust to the fast-paced SEC. Smart mentioned he’s improving, but he still needs to focus on moving in the pocket and reading coverage better.

The five-star QB has been lackluster, owning the second-lowest completion percentage (53%) in the conference and a mediocre 10-to-5 TD-to-INT ratio. Despite that, Kentucky head coach Mark Stoops praises the young signal caller and says he doesn’t have many holes.

Stoops credits a strong core of offensive lineman for the team’s recent success. They’ve protected QB Stephen Johnson well enough that he’s been sacked 11 times (sixth in the conference). And even with only seven touchdowns, he owns a 133 QBR. But the players most benefitting from the O-line are the running backs. The team has 15 rushing touchdowns compared with 11 in the air. Benny Snell Jr. and Stanley Williams have combined for 11 touchdowns and 1,482 yards. Williams, the better of the two, is third in the conference in rushing yards and fifth in yards per attempt (7.5). They showed off their prowess against Missouri last week.

Georgia holds a 55-12-2 all-time record against Kentucky, and have beat the Wildcats six years in a row. Kickoff is at 7:30 p.m.