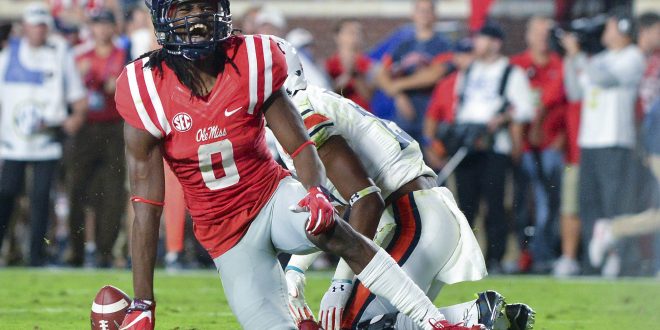 The Ole Miss Rebels will host the Georgia Southern Eagles this Saturday, November 5 at noon from Vaught-Hemingway Stadium. Both teams had upsetting losses last week and are looking for a win this week. This will be an interesting game to watch, as this Saturday will mark the first meeting between Ole Miss and Georgia Southern to ever occur.

The Ole Miss Rebels are unrecognizable this season, compared to the 2015 season where they finished with a 10-3 record and were ranked No. 10  in the AP Top

25 Poll. They are having a rough 2016 season so far as they are ranked 7th in the SEC West with a 3-5 losing record. Unfortunately for the Rebels, they have had an exceptionally hard schedule this year. Six of their first eight opponents have been ranked in the Top 25. These last three weeks have been especially hard to watch for Rebels fans, as they have lost to three major SEC West teams. Arkansas started Ole Miss’s three game losing streak on November 15 when they defeated the Rebels 34-30. The LSU Tigers then destroyed Ole Miss by a final score of 38-21, and Auburn defeated the Rebels 40-29 last week.

Despite their rough schedule, senior quarterback Chad Kelly still leads the SEC in passing yards, total yards, and passing touchdowns. Kelly has a total of 316.5 passing yards per game, 355.4 total yards per game, and has thrown 18 passing touchdowns. With Georgia Southern being Ole Miss’s first unranked opponent since Memphis in the beginning of October, Chad Kelly and Ole Miss head coach Hugh Freeze are both looking to be 1-0 after Saturday’s game.

If the Eagles have a chance against Chad Kelly and his offense, their defense needs to step up for this game. Linebacker Ukeme Eligwe was the only player to score a touchdown in their last game as he returned a 90 yard fumble. He was also named defensive player of the week by the Sun Belt Conference last week.

Be sure to catch the game this Saturday at 12 p.m. on ESPNU.

Sydney is a senior studying telecommunications with a specialization in sports media at the University of Florida. She is a multimedia sports reporter for ESPN 98.1 FM/850 AM WRUF and WUFT-TV.
Previous SEC Preview: Texas A&M at Mississippi State
Next SEC Preview: Kentucky vs. Georgia