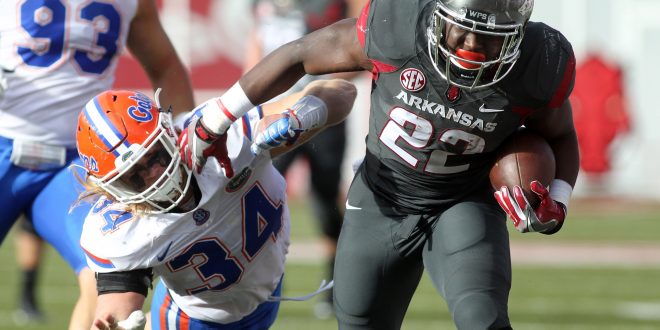 With a chance to all but clinch the SEC East and stay alive in the College Football Playoff, the Florida football team instead went into Razorback Stadium Saturday and fell hard to the Arkansas Razorbacks 31-10.  The win improves Arkansas to 6-3 overall while the Gators fall to 6-2 on the season.

The Hogs kept momentum on their side from the beginning, scoring two first quarter touchdowns against a Gator team that hadn’t surrendered one in the first quarter all season.

Gator head coach Jim McElwain says Florida had a poor start to the game, which contributed to an “embarrassing” offensive performance.

Arkansas later went on to score via a 91-yard drive, going up 14-0 as tailback Rawleigh Williams punched in a six-yard score.

Not to be outdone, Florida’s defense responded, settling the crowd with a pick-six of their own. The Gators only touchdown came when cornerback Duke Dawson jumped a comeback route and put the Gators on the board with a 37-yard return.

Florida entered the second quarter down 14-7, but their best field position of the day was all but wasted. After beginning a drive on their own 43-yard line, Del Rio threw deep into double coverage, and a pass intended for Antonio Callaway ended up in the hands of Razorback defender Josh Liddell.

Florida’s defense kept them in the game early on, corralling Arkansas momentum despite the Razorback offense tacking on a balanced 267-yard first half performance.

But Arkansas went up 21-7 in the second quarter when receiver Drew Morgan caught a 7-yard toss from from Austin Allen.

Florida opened up the third quarter with consecutive three-and-outs, a fitting start to their lackluster offensive effort in the second half. While Florida’s defense looked solid throughout the first half, the battle for time of possession began to swing the Arkansas way as time ticked by. By the end of the game, Arkansas held the ball for 39:21, nearly twice as long as Florida did.

After going 1-for-11 on third downs, McElwain says the Gators let the Arkansas crowd get into the game early on.

Florida’s defense has been stellar this year, but the unit looked completely gassed as injuries stacked up against the Gators. Veteran linebacker Jarrad Davis, who returned from injury just last week, left the game with an ankle sprain. Meanwhile, linebacker Alex Anzalone was also sidelined by an injury, and center Cameron Dillard left the game with an apparent knee injury.

While trying to play catch up, Florida’s offense couldn’t stay on the field long enough to give their defense any meaningful rest. By the end of the game, Arkansas had run 75 plays to Florida’s 51.

Before this contest, the Gator offense averaged over 170 rushing yards per game, but the Razorback defense held them to 12 yards on 14 attempts. On the flip side, Arkansas rushed for 223 yards, outperforming their season average by over 40 yards.

Florida’s only offensive score came in the fourth quarter. Eddy Pineiro showed off his leg, nailing a 49-yard field goal making the score to 24-10.

With a bit of momentum on their side, Florida’s hopes were crushed as Rawleigh Williams added his second score on a 41-yard touchdown after the Razorbacks earlier recovered an attempted onside kick by Florida which made the score at 31-10.

Gator offensive tackle David Sharpe says the loss is disappointing, but Florida will continue to practice hard as they move forward with their season. Sharpe’s optimism should serve as a reminder that Florida’s season isn’t completely lost, but significant adjustments will need to be made.

Moving forward, there may be a change at the quarterback position. McElwain confirmed that Kyle Trask and Feliepe Franks are still available, and their red shirt status could change.

As the Gators prepare to welcome the South Carolina Gamecocks, McElwain said “we’ll see what we’re made of this week.”

I'm a senior studying Political Science at the University of Florida. Multimedia Sports Reporter for ESPN Gainesville 95.3 and WUFT - Passionate about life, sports, and fitness.
@charliejordanuf
Previous No.10 Florida Ready for Road Game Against Arkansas
Next NFL Week 9 Preview: Key Games Around the League