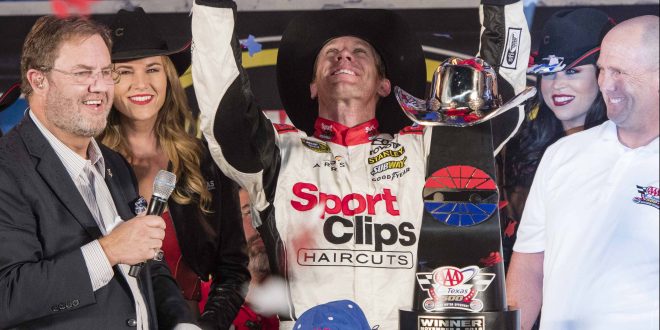 The 41 laps of a rain-shortened race were all Carl Edwards needed to take home the checkered flag at Texas Motor Speedway. Even more, the victory clinched a spot for Edwards in the “Championship 4” of the NASCAR Sprint Cup Series chase.

Edwards joined Jimmie Johnson as the first two drivers to clinch a championship-contending spot at the NASCAR Sprint Cup Finale. The remaining two spots will be decided next Sunday at Phoenix.

Edwards’ three Joe Gibbs Racing teammates (Denny Hamlin Kyle Busch and Matt Kenseth) are among the six other drivers still in contention. With only the aforementioned two spots available however, not all of them can advance.

For Edwards, the victory marked his fourth career win at Texas. However, it was also his first win at the Texas Motor Speedway in eight years. He won both Cup races at the Speedway in 2008. This could serve as a good omen for Edwards, as that season he finished with a career-best point total.

The victory itself came after Edwards took the lead on lap 258, edging Martin Truex Jr. off pit road. With 45 laps remaining of the originally scheduled 334, the race was declared officially declared over.

Edwards’ elation was clear after the race, and he’ll hope to carry the momentum into Homestead. 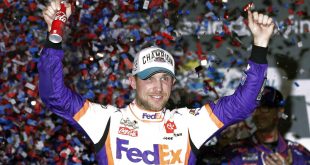 Gentlemen, start your engines. NASCAR is back. The NASCAR Cup Series heads to Darlington on …