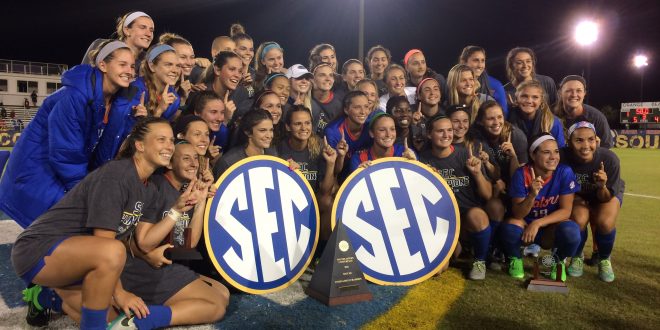 The Florida Soccer team won the SEC Tournament against Arkansas in overtime for their second title in a row and their 12th in program history. November 6, 2016

In a match as thrilling as any other this season, the Gator soccer team claimed the SEC Tournament title over Arkansas Sunday night 2-1. The game went to overtime after both teams scored one goal a piece in regulation. It was senior Brooke Sharp for the Gators that was able to head in the golden goal and put Florida on top of the SEC for the second year in a row.

On Sunday afternoon in Orange Beach, Alabama the No. 19 Arkansas Razorbacks were set to take on the No. 15 Florida Gators for the 2016 SEC Tournament title. The Gators were all too familiar with being in this position. This would be there 17th appearance in the title game having won the tournament eleven times, most previously, last season. For Arkansas this was their first shot to win the SEC Championship since 1996.

In the first half of the match, Florida dominated time of possession and was able to take the lead in the 29th minute. Senior Savannah Jordan scored her team-leading 15th goal of the season after a pass from Melanie Monteagudo who was wide outside of the box. Jordan just had one defender around her inside the box, so when the ball came to her, she made one touch, turned around and put the ball in the goal with her left foot. Julia Lester, along with Monteagudo, were each given an assist.

After halftime, the Razorbacks made the adjustments they needed to in order to even the score at 1-1. Arkansas came out high pressing their forwards and midfielders and sometimes would have a huge lineup change, substituting six players at a time throughout the second half. With only eleven minutes to go in the match, Arkansas went in for the attack when Florida’s goalkeeper Kaylan Marckese came up to clear the ball, but it went right to Arkansas’ Alexandria Fischer who made a 22-yard shot in the upper right corner of the goal to tie the game. Florida’s Head Coach Becky Burleigh was proud of how her team stayed composed when the Razorbacks tied the game before the end of regulation.

Florida’s Mayra Pelayo had a great opportunity that missed the goal wide in the closing seconds of the second half, so the championship was going into overtime. The golden goal for the Gators was scored with only 58 seconds left in the first overtime by senior Brook Sharp. The goal was assisted by seniors Jordan and Meggie Dougherty Howard who played give and go with the ball as they approached the goal when Dougherty Howard passed it in front of the goal for Sharp as she headed it in the back of the net. After the match, Sharp explained what she saw in that Championship-winning goal.

Florida went through a lot to get to this point in the tournament. In their first match against Missouri, they won after eight rounds of penalty kicks and then beat South Carolina in the semifinals, a team that hadn’t lost all season. And of course they beat Arkansas in a thrilling overtime finish. During the regular season, Florida had lost to both South Carolina and Arkansas. Jordan and the rest of the Gators are confident this week’s play will only help them moving forward into the NCAA postseason.

Monday, the NCAA field of 64 was finalized and the Gators received a No. 1 seed. They will host FGCU in the first round of the postseason this weekend.