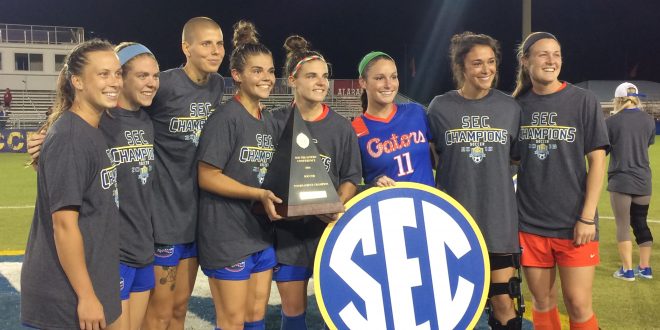 Florida Soccer Team Goes into the NCAA Tournament as a No. 1 Seed

This Friday marks the beginning of the NCAA Women’s Soccer Championship. The Florida Gators were awarded a No. 1 ranking for the tournament which means they will have home field advantage until the semifinals.

The Tournament bracket was released Monday afternoon. Along with Florida, the three other No. 1 seeds are Stanford, South Carolina and West Virginia.

And the GATORS grab a No. 1 seed in the 2016 DI #NCAASoccer Women's Championship! pic.twitter.com/lcbC8j5j3T

The Gators’ first opponent will be the Florida Gulf Coast Eagles. FGCU most recently won the Atlantic Sun Conference Tournament with a 2-0 victory over Lipscomb. This season will be their third straight NCAA Tournament appearance. The Eagles are led by senior Tabby Tindell who has 14 goals this season. Defensively, they have had ten shutouts on the year behind freshman goalkeeper Melissa Weck. Florida’s head coach Becky Burleigh said that Florida is used to playing FGCU and knows they will be a threat.

After winning the SEC Tournament last weekend against Arkansas, Florida proved to be one of the best teams in the country. Along the way to winning the championship the Gators defeated Missouri in penalty kicks and  No. 2 South Carolina, a team that had not lost a match all season. The championship game against Arkansas was an overtime thriller that ended with a header from senior Brooke Sharp with one minute left in the first overtime. Gator senior Savannah Jordan explained that the SEC Tournament will help them to learn and grow to make them stronger for the NCAA Tournament.

The 2016 DI Women's Soccer Championship bracket is OUT! Take a look at the full 64-team field: https://t.co/uRybIy8wYC #NCAASoccer pic.twitter.com/4egKYv41Bq

The Gators believe that they still have room to improve, which if true, would make them very hard to beat. 12 different players have scored a goal for Florida this year and Jordan leads the team with 15. In their last eleven matches they have outscored their opponents 25-6, including seven shutouts for goalkeeper Kaylan Marckese and a back line that has suffered many injuries late in the season. They all know each game moving forward could be their last, so they plan on focusing on the postseason one game at a time. For the seniors, Jordan explained that the motivation they will play with comes from knowing each game could be their last as a Gator.

The match Friday night will start at 7 p.m. at the Donald R. Dizney Stadium in Gainesville, Florida. You can watch the game on the SEC Network (+). The winner will move on to the second round next week to face the winner between Wisconsin and Marquette. The team that loses will conclude their 2016 season.

Previous Preview: Gator Volleyball Back At The LemDome
Next Gorjok Gak Ruled Eligible for the 2016-2017 Season