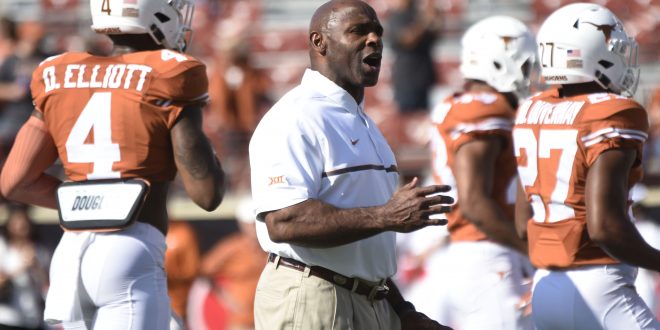 Charlie Strong, head coach of the University of Texas football team and former defensive coordinator at Florida, may have coached his last game for the Longhorns.

With the Longhorns’ record dropping to 5-6 after losing to Kansas Saturday, Strong was asked what he thinks the future holds for him. Texas had not lost to Kansas since 1938.

The Longhorns’ regular season will conclude after their conference match-up with Texas Christian University (5-5) Friday. A win on Friday would make Strong’s team bowl eligible and could potentially keep his coaching dreams alive.

Monday morning, Strong spoke at his weekly press conference with the support of his football players.

Though Strong’s status seems unclear, he remains firm on what he wants. “Next year I want to come back,” Strong said.

A $10.7 million buyout for his final two years on his contract would be in order if fired after the game against TCU.

Including Strong’s jobs as interim head coach of Florida for the Peach Bowl following Ron Zook’s firing, along with his head coaching tenure at Louisville, he is 53-36 all-time.

Before becoming a head coach at Louisville, Strong was the defensive coordinator at Florida from 2003-2009.

As co-defensive coordinator alongside Greg Mattison, Strong’s defense held Ohio State to only 82 yards in the Gators’ 41-14 BCS National Championship victory in 2006. As the lone defensive coordinator for the 2008 BCS National Championship, Strong and his defensive unit held Oklahoma to just 14 points. Coming into the game, Oklahoma was averaging 54 points per game. The Gators emerged with the 24-14 win. This was in his fourth stint at Florida. He previously held positions as graduate assistant in 1983-84, linebacker coach in 1988-89 and defensive line coach in 1991-94.

If Charlie Strong is fired from Texas, he will have options. Power 5 football programs searching for a head coach: Baylor, LSU and Purdue.