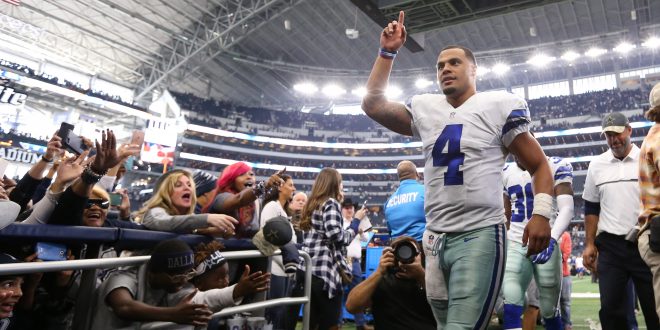 We learned it’s a good thing there are still six weeks for the season play out.  The AFC now has five teams within two games of a playoff spot.  The NFC wild card playoff picture is not any clearer, with four teams within a game and a half.

Here is your Week 11 Round Up:

Prescott Leads Cowboys to 9th in a Row

Dak Prescott continued his impressive season, throwing for 3 TDs including two to Dez Bryant. Prescott led the Cowboys to their ninth win in a row by taking care of the Ravens 27-17. With the win, they improved to 9-1 overall on the season. Ezekiel Elliot set a franchise record for yards in a season by a rookie, breaking the 1,007-yard record held by Tony Dorsett since 1977.

The Colts won their second in a row, edging out Tennessee 24-17 to improve to 5-5 and keep their playoff hopes realistic. Andrew Luck threw for 2 TDs in the game, while T.Y. Hilton had 5 catches for 97 yards and a score. Marcus Mariota threw for 290 yards and two TDs in the losing effort.

LeSean McCoy had the lone touchdown for Buffalo, but their defense stepped up and held the Cincy offense in check for a hard-fought 16-12 win.  After dropping three in a row, the win moves the Bills to 5-5 and keeps them in the AFC playoff mix.

Adding injury to insult, the Bengals lost star WR A.J. Green in the game as he exited just one minute into the first quarter with a seemingly serious hamstring injury.

Vikings CB Xavier Rhodes picked off Carson Palmer in the end zone and took it back 100 yards for a touchdown late in the first half to open up a 20-10 point lead.  Cordarelle Patterson then took the opening kickoff of the second half 104 yards for a touchdown, which proved to be all the scoring they would need as the Vikings held off the Cardinals 30-24.  The win improves Minnesota to 6-4 and keeps them in a tie for first with the Lions in the NFC North.

Russell Wilson threw for 272 yards and a touchdown, and even hauled in a touchdown reception on a Doug Baldwin pass on an end-around, as the Seahawks improved to an NFC West-best 7-2-1.

After a 3-0 start, Philadelphia has now lost 5 of 7 to fall into last place in the NFC East.  The Seahawks are now a perfect 5-0 at home this season.

Contrary to the rainy weather in San Francisco, Tom Brady shined throwing for four TDs and 280 yards. With the victory, New England maintained its two-game lead in the AFC East improving to 8-2.

Kirk Cousins threw for 375 yards and three TDs, including a 70-yard bomb to Pierre Garcon, as the Redskins handed the Packers their fourth straight loss and sixth of the season (4-6).  The win gives the Redskins a half-game lead over Minnesota for the last NFC wild card spot.