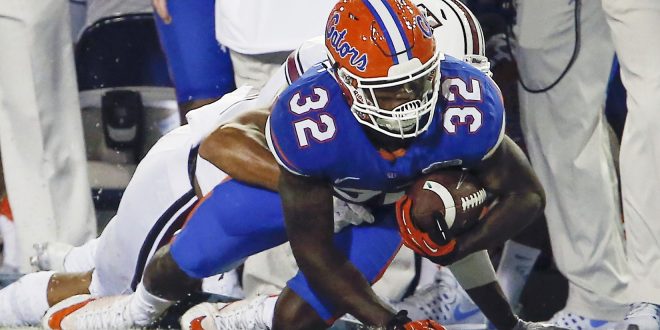 On Thursday, the University of Florida announced that sophomore running back Jordan Cronkrite was granted his release and is expected to transfer from the team.

Cronkrite took a backseat this season in the rushing department, becoming the team’s fourth-leading rusher. He recorded 145 yards and one touchdown in only 31 carries. Jordan Scarlett (165 carries, 811 yards, six touchdowns),  Lamical Perine (84 carries, 416 yards, one touchdown) and Mark Thompson (66 carries, 303 yards, two touchdowns) all surpassed him on the depth chart. The team used the Miami native sparingly in his freshman season, notching 157 yards and three touchdowns in 44 attempts.

McElwain: "We wish Jordan (Cronkrite) nothing but the best & will do everything we can to support & assist him & help him get what he wants"

Cronkrite initially won the job in preseason camp, but suffered an injury in mid-August that opened the door for competition. The former four-star recruit will retain two years of eligibility. He wants to join a new school by next month. Before committing to Florida, he had offers from Miami, Alabama, Lousiville, Notre Dame and more.

Regarding transfer of #Gators RB Jordan Cronkrite: expect #FAU to be among those in the mix to land the former four-star recruit.

What This Means For UF

This is not a big loss for the Gators and one they can easily absorb because Cronkrite was never a key contributor these last two seasons. Florida is expected to continue feeding the ball to the same trio from this season.

Filling in Cronkrite’s roll next year is Malik Davis, a three-star back who committed in late October.