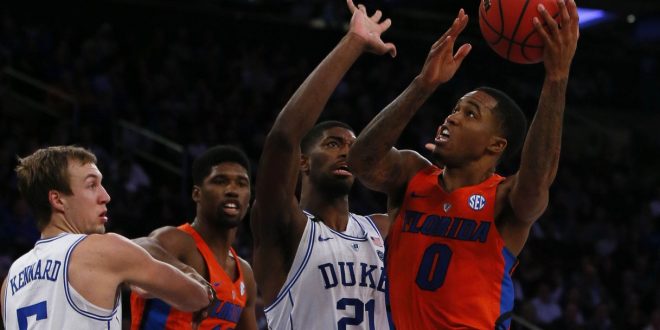 No. 21 Florida Looking For Their First Win Against FSU in 3 Years

While the Florida Gators lead the all-time series vs. their closest rival, Florida State, the Seminoles have won the last two games vs. UF. If Florida can get it done vs. the ‘Noles on Sunday evening at 4 PM in Tallahassee, they’ll have their first 8-2 start since the 2013-2014 season. The past three meetings between the two teams have been decided by a total of five points and another close game is in store between these two foes.

FSU’s roster consists mostly of underclassmen, with freshman and sophomores making up 10 players of their 16-man roster. Leading the Seminoles’ attack are Dwayne Bacon and Jonathan Isaac.

After electing not to enter the NBA Draft last season, Dwayne Bacon is on a tear to start the 2016-2017 season. Bacon is hitting on all cylinders, as the ‘Noles are off to a 9-1 start to the season, knocking down shots in the paint, mid-range and from downtown. Bacon, the Lakeland native, is averaging a team-leading 16.6 points per game on an efficient 50.4% from the field. The sophomore is knocking down 40.9% of his three-point shots scoring 16 points, adding five rebounds and four assists in the team’s last win vs. Nicholls State.

Jonathan Isaac is a diaper-dandie with a completely different style of play from the 6’7″ stretch-three. Isaac was the 12th-ranked player in the 2016 ESPN100, accepting his Florida State offer over historic basketball powerhouses like Kentucky and Louisville. Isaac even spurned the Gators to become a Seminole. The 6’10”, 210 pound big-man is averaging 15.1 points and a team-leading 7.3 rebounds per game. The most daunting part about Isaac isn’t his size, but his range. The almost 7-footer has the third highest three-point shooting percentage on the team, hitting an insane 44.4% of his shots from beyond the arc.

The Gators may have to use a more athletic player like Devin Robinson or Justin Leon to defend the lengthy big-man. Isaac has missed the past three games due to an injury, but FSU Head Coach Leonard Hamilton said that he feels “fairly confident” that Isaac will play vs. UF on Sunday evening. 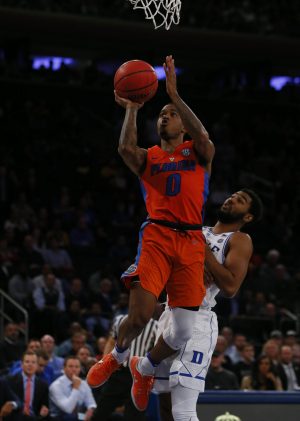 “He’s a 6-10 2-3-4, whatever he is. He’s a really talented kid,” said White. “I’ve been impressed with his motor for a freshman on film. He’s really really playing hard on both ends. He’s got tremendous length of course. We switch so much that for us, matchups are less important than most teams because we’re gonna have Kasey Hill be on him at times. And Kasey will defend him a little bit different than say a Devin Robinson, or a John Egbunu if he gets into an emergency switching situation with Isaac where he’ll have to give him a little more space. Kasey will be trying to pressure him as much as possible, make him put it on the floor. It’s what we do. And it’s kind of our form of disruption if you will. It’s what suits us best.” 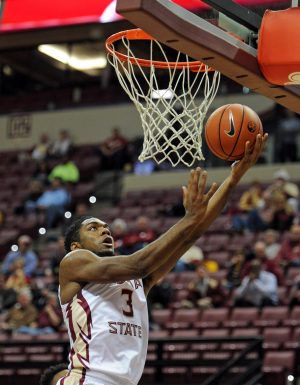 The ‘Noles can score you to death and are one of the best teams in the nation at it. The Seminoles rank 7th in the nation in points per game (90.3 PPG), 7th in the nation in scoring margin (+22.4) and 3rd in the nation in field goal percentage (52.4%). Along with their ability to score, Florida State swings the ball around the perimeter near flawlessly, always seeming to find the right shot. FSU ranks 28th in the country in assists per game (17.4 APG) and 22nd in the country in Assist to Turnover ratio (+1.46). If Florida State finds their shot early, the Gators could be in a load of trouble. They haven’t had to do it much, but when Florida plays from behind, like we saw in a portion of the Duke game, they start to show bits of desperation in their offense and shot attempts.

Stop me if you’ve heard this before, but the Gators once again scheduled an extremely competitive out-of-conference schedule. According to CBS Sports, Florida ranks #1 in the country in strength-of-schedule. UF has already played some tough mid-majors, and even conference champion picks, in FGCU and Belmont. In bigger conferences, the Gators have faced off against even more quality opponents in Duke, Gonzaga, Miami and Seton Hall.

Florida has a good bit of experience coming into this game, while the Seminoles have seemingly beat up on lesser opponents. The ‘Noles rank 110th in strength-of-schedule, according to the same poll, with their toughest games so far coming against Iona, Temple, Minnesota and George Washington. The Gators will be FSU’s first real test to see if they can compete with the bigger players in their conference and make a possible NCAA Tournament run. 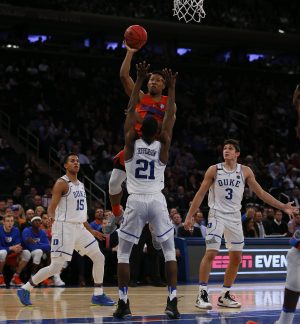 Making a Loss a Positive

Florida is coming off of just their second loss of the season, losing to the Duke Blue Devils on Tuesday night in Madison Square Garden at the Jimmy V Classic, 84-74. Florida led that game for a good portion of the middle and late end of the first half, before letting up a 15-3 run to end the first twenty minutes down 10 to Duke. Despite losing that game, Florida showed they were able to keep up and run with one of the nation’s top teams. The Gators shot 42.6% from the floor and a terrific 54.5% from three-point land.

Their downfall, which they’d been so good at this season, was free-throw shooting, where they only hit 69.6% of their shots from the charity stripe. KeVaugn Allen was another reason the Gators kept it close, adding 21 points on 8-13 shooting. In his short career in Gainesville, whenever a big game has presented itself, Allen has come through for the Gators. Sunday’s game will be KeVaugn’s second outing against the Seminoles. His first was one to remember, scoring a career-high 32 points on 10-18 shooting. If Allen can repeat what he did against the ‘Noles this weekend, Florida will be in very good shape.

”You know, that game gave me a lot of confidence going into the rest of my games,” said KeVaughn Allen. “Shooting with confidence and just playing hard on D every night.”

In Joe Lunardi’s latest Bracketology, the Gators remain a 4-seed, with their current draw in the Midwest region and a Round of 64 date vs. Chattanooga. Florida State has moved up to a 7-seed, with an East region birth and a first-round face-off with the Maryland Terrapins.

Chris Chiozza is questionable with a bruised quad. Jonathan Isaac is probable.

“He didn’t practice yesterday, I’m not sure if he’ll practice today, he’s got a contusion, charlie horse, whatever you want to call it,” said White. “And for him, whose game is predicated on speed, it really affected him in the Duke game of course, and his ability to help us, and obviously his ability to practice.”

Sunday’s game tips at 4 p.m. and you can watch on ESPNU and the WatchESPN app with Mike Morgan and Cory Alexander on the call. Listen to the game as always on the Gator IMG Sports Network with Mick Hubert and Mark Wise on the call.