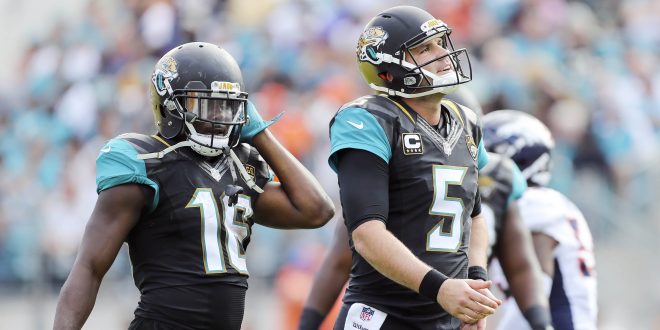 The Jacksonville Jaguars (2-10) will host the Minnesota Vikings (6-6) this Sunday at EverBank Field. The Jags are coming off of a 20-10 loss to the Denver Broncos last week, dropping them to 1-5 at home this season and marking their seventh consecutive defeat.

The offense will be looking to rebound after a disappointing performance against Denver in which quarterback Blake Bortles threw two interceptions, including a costly pick-six to Broncos defensive back Bradley Roby, and completed less than half of his passes in a 19-42, 181 yard effort.

Bortles has 15 interceptions on the season, a statistic that could pose a problem for the Jags offense as they go up against one of the league’s most vaunted defenses in the Vikings. Minnesota has forced 22 turnovers on the season, a key part of the team’s +13 turnover differential, second in the league only behind Oakland. Facing a secondary that includes Xavier Rhodes and Harrison Smith, ball security will be of the utmost importance to Bortles on Sunday.

Jacksonville might have to rely on their defense in order to pull out a win on Sunday. The unit held Denver to only 206 yards of offense in the loss, with running back Devontae Booker’s six-yard touchdown run the only trip to the end zone they allowed. The defense has been one of the lone bright spots for the Gus Bradley’s team, as they rank second in the league in pass defense, allowing just under 196 passing yards per game.

The unit was expected to improve this season with a lot of young talent on that side. Defensive back Jalen Ramsey has had an instant impact after being selected in the first round of the 2016 draft, while Malik Jackson has been a force on the defensive line, coming over in free agency after winning a Super Bowl with Denver.

The Jaguars’ defense against Minnesota’s offense seems to be one of the key matchups that the Jaguars could take advantage of, as the Vikings have had their own troubles this season on the offensive side of the ball.

The Vikings come in to the game ranked next-to-last in yards per game, averaging just under 200 yards, and 26th in points per game, averaging a bit more than 19 per contest. After a quick 5-0 start out of the gates, Minnesota has dropped six out of their last seven, going 0-4 on the road during that stretch. While some of the struggles may be pinned on the early loss of Adrian Peterson, quarterback Sam Bradford has struggled at times behind an offensive line that’s had to deal with injuries throughout the season. Minnesota has scored more than 20 points only once during their last seven games.

Therefore, this game appears set for a defensive battle as Minnesota also boasts one of the league’s best defenses. They rank in the top five in total defense, pass yards per game, and points per game. They boast a vaunted secondary, with the aforementioned Rhodes and Smith, to go along with the veteran presence of Terrance Newman.

A possible wild card in this game could be the special teams. Minnesota’s Cordarrelle Patterson is one of the league’s most explosive returners, as he leads the league in yards per kickoff return. In what might be a close defensive battle, Patterson’s return abilities could play a big role in terms of field position.

Leads the NFL in average yards per kickoff return ✔️

And while the Jags are looking to build towards a positive last month of the season, the Vikings are still fighting for their playoff lives. Despite their recent struggles, they still sit at 6-6 and only one game back of the Tampa Bay Buccaneers for the last wild card spot.

The Vikings lead the all-time series 4-1, with last meeting coming in 2012, a 26-23 overtime win for the Vikings when they still played at the Metrodome.

Kickoff from Jacksonville is scheduled for 1 p.m. on Sunday.

Native New Englander. Follow me on Twitter: @jonacosta_10
@jonacosta_10
Previous No. 21 Florida Looking For Their First Win Against FSU in 3 Years
Next NFL Preview: Dolphins Take on Cardinals