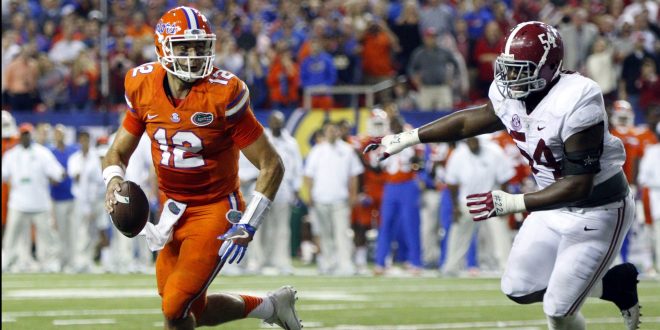 Amid rumors that head coach Jim McElwain would burn Feliepe Frank’s or Kyle Trask’s freshman redshirt, Florida’s starting quarterback Austin Appleby says his process never changed. According to Appleby, he’s been preparing to start every day following the 54-16 loss to top ranked Alabama in the SEC Championship. And now for the Gator senior, this will be his final game at Florida.  And he will be the starter.

That statement says a lot about Austin Appleby, whose resiliency earned him the starting position after Luke Del Rio went down with an injury earlier in the season.

In fact, despite some backlash from the Gator Nation, Appleby produced the best overall accuracy percentage of any quarterback who found themselves unlucky enough to face Alabama’s defense this season. That’s according to Pro Football Focus, an analytics service that calculated Appleby’s overall accuracy percentage of 74.3 percent by removing throwaways, batted passes, and drops.  Ole Miss quarterback Chad Kelly put up the second best accuracy rating at 66.7 percent.

Regardless of his overall accuracy percentage, three interceptions were the main fault in Appleby’s SEC Championship Game performance. However, the Gators have come too far to waste a freshman quarterback’s redshirt season on one game against Iowa in the Outback Bowl.

If McElwain was ever planning to give Franks or Trask a chance, their opportunity would have come directly after blowing a 21-3 halftime lead against Tennessee.

The Gators are moving forward, and Appleby says Florida’s passing game reflects more than just one player’s performance. Despite offensive frustrations throughout this season, Gator fans may be disappointed to find that there is no singular factor to blame. Many fans have expressed issues with offensive coordinator Doug Nussmeier’s play calling, but his success depends on 11 players executing a game plan on each down.

A graduate transfer from Purdue, Appleby’s first playing time came against Iowa, and now his final game he will face Iowa again in the Outback Bowl.

In the South, Appleby says the Big Ten Conference is known as the “SEC’s little brother,” but he reminded everyone that Iowa is a great team that can beat anyone.

A true competitor, Appleby says it’s motivating to be considered the underdog, and Florida will now focus on putting together a gameplan worthy of their opponent.

I'm a senior studying Political Science at the University of Florida. Multimedia Sports Reporter for ESPN Gainesville 95.3 and WUFT - Passionate about life, sports, and fitness.
@charliejordanuf
Previous Florida Gearing Up for SEC Opener at Arkansas in Fayetteville
Next FEATURE: Sports and the Social Media Revolution