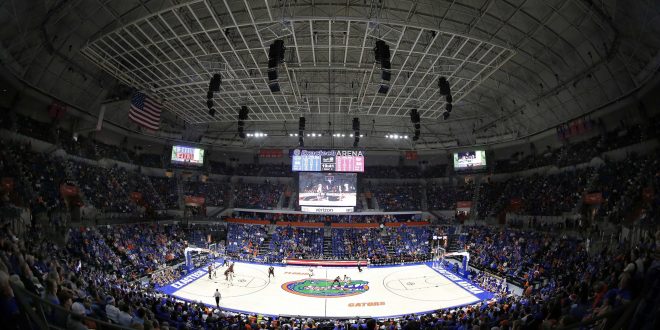 Florida Gearing Up for SEC Opener at Arkansas in Fayetteville

After a disappointing 1-4 finish to SEC play last season, essentially costing them a guaranteed spot to the big dance, Florida is greatly looking forward to Thursday night, when they open up SEC play against the Arkansas Razorbacks in Fayetteville. The Gators are 20-11 all-time against the Razorbacks and have won the last 10 of 11 games they’ve played against Arkansas.

Arkansas is led by Dusty Hannahs, who is in his senior year with the Hogs. Hannahs spent his first two seasons at Texas Tech before transferring to Arkansas. The upperclassman is averaging a team-leading 14.9 points per game and was near impossible for the Gators to stop last time the two teams met. Hannahs went off for 33 points on 12-of-23 shooting, going 7-for-7 at the charity stripe.

The second of three familiar foes the Gators will square off against is Moses Kingsley, who was named to the All-SEC Defensive team just a season ago. The Nigeria-native is averaging a near double-double, putting up 11.3 points and grabbing 8.3 rebounds per contest. Kingsley was an important factor in the team’s most recent victory vs. Sam Houston State, finishing with 17 points and seven rebounds, and ranks first in the SEC in blocks per game. Lastly, Florida fans will get another taste of Anton Beard, another one of the Razorbacks’ speedy guards. Beard and KeVaughn Allen went to the same high school in Little Rock, Arkansas and even played on the same AAU team. Beard had a season-high 16 points vs. Sam Houston State. 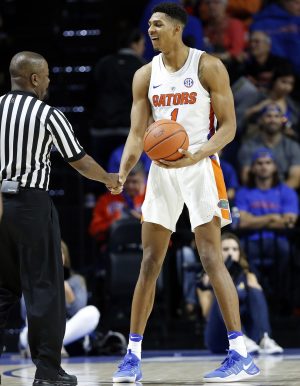 Arkansas averages 83.6 points per game, good for 31st in the nation and second in the SEC. The Razorbacks have scored at least 84 points in 7 of their first 12 games, boosting them to an 11-1 start to the season. The Hogs are also one of the better three-point teams in a poor outside shooting conference, hitting 36.7 percent of their shots from downtown, good for t-2nd in the SEC.

In Florida’s opening game at the new Exactech Arena at the O’Connell Center, the Gators dominated the Arkansas-Little Rock Trojans 94-71, knocking down 16 of 31 (51.6 percent) of their three-pointers and 59.6 percent of their looks from the entire floor. Five different Gators scored at least 11 points including Kasey Hill (11 points and 11 assists),  Kevarrius Hayes (12 points and eight rebounds), Canyon Barry (15 points), KeVaughn Allen (19 points and five rebounds) and Devin Robinson (21 points and seven rebounds). Arkansas’ state-school-system counterpart were simply out-matched against the deeper Florida Gators.

John Egbunu returned to practice on Monday afternoon after missing the past two games vs. Charlotte and Arkansas Little-Rock due to a hamstring injury. Egbunu is questionable for Thursday night’s game and would be of great help in stopping Moses Kingsley. Without Egbunu, Kevarrius Hayes, Schuyler Rimmer and Gorjok Gak may have a difficult time stopping the All-SEC level big man. 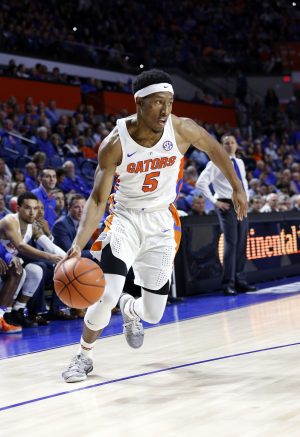 Florida moved back into the AP Poll this week, coming in at No. 25.  Joe Lunardi’s latest bracketology, which came out on December 22 and took into account the Gators’ thrashing of the Trojans, has Florida as a No. 6 seed in the West, slated with a first-round match-up vs. the No. 11 seed Rhode Island Rams in Orlando.

Thursday night’s game tips off at 9 p.m. in Fayetteville, Arkansas at Bud Walton Arena. The game is airing on the SEC Network with Mike Morgan and Jon Sundvold on the call. You can listen to the game, as always, on the Gator IMG Sports Network with Mick Hubert and Bill Koss.

Previous FEATURE: The Man Behind the Microphone
Next Appleby Looking Forward to Outback Bowl