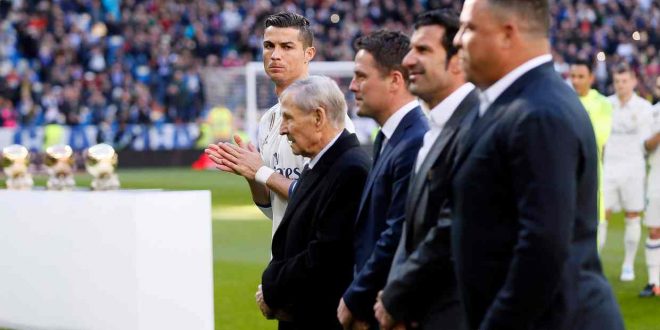 After winning the FIFA Club World Cup in Japan and closing an amazing 2016, Real Madrid were looking ahead to continue its winning streak against Granada CF. Earlier this week, “Los Blancos” had a 3-0 victory over Sevilla in the Copa del Rey. This early La Liga game was the perfect opportunity for Real Madrid to tie the unbeaten record of 39 games that their beater rivals, FC Barcelona, achieved last year. And also the opportunity to congratulate Cristiano Ronaldo for his fourth Ballon D’Or of his career in a pre-game ceremony.

Real Madrid started the game very offensively with a classic 4-3-3. The great mobility and passing precision by Luka Modrić and Toni Kroos allowed them to drag rivals, open spaces and creating passing lanes for their forwards. Because Granada had a five-player backline, the constant positional switching of Ronaldo, Karim Benzema and Isco was crucial for the team to confuse the defenders in the man-to-man coverages.

Once Granada tried to build-up a play from the back, Real Madrid make them pay thanks to their velocity and precision in transitions. The classic formula from the one who has been the X-factor in so many games for Real Madrid since Zinedine Zidane became the head coach. Casemiro intercepted a lost ball by Sergi Samper and passed it to Benzema. The French man assisted Isco — who was running to the box. Isco shot the ball right away and scored the first of what would be a goal bonanza for Real Madrid.

Eight minutes later, Modrić sent a shot from distance that Guillermo Ochoa could not grab. Benzema — who was offside — did not hesitate to shot the rebound and score the second goal of the game.

For the third goal, Marcelo advanced through the left wing to dribble a defender and sent a smooth cross inside the box to Ronaldo for a header in the 27th minute. The fourth goal came immediately five minutes later after Real Madrid took advantage of another mistake by Granada’s backline in a build-up. Modrić made the cut through the right wing to sent a short cross to Isco, who finished it with a one-touch definition.

Early in the second half, Zidane decided to give another chance to James Rodriguez to play — he had a great Copa del Rey performance earlier in the week. He did not disappoint. In the 58th minute, Rodriguez sent a free-kick cross from the right wing to Casemiro, who was wide open at the moment of making the cut through the box and scoring the fifth and final goal of the game.

It was a dominant performance by Real Madrid in every aspect of the game. Of course, the conservative and defensive-oriented game plan by Granada helped the hosts to have a better control of the game. But still, it looks like Real Madrid is finding — or establishing — an identity in its game plan. The constant scheme-switching from a 4-3-3 to a 4-4-2 and vice versa; high-pressure and quick recovery of the ball; the freedom by Kroos and Modrić to be constantly in motion around the midfield to pull the strings of the offense; the forward rotations — let’s wait what happen when Gareth Bale comes back — that give more dynamism to the team.

Journalism student at the University of Florida. Venezuelan and future sports journalist.
@joseso2793
Previous Gator Women’s Basketball Falls to No. 5 Gamecocks
Next Gator Gymnastics Starts Season With a Win