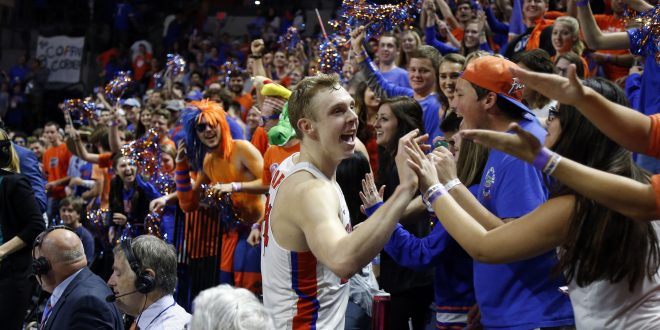 The Florida Gators men’s basketball team has had an exciting season thus far. And while the entire team has been on a roll, there have certainly been some standout players. Canyon Barry has been just that, an electric player off the bench providing a much needed spark for this Florida team.

Canyon Barry is a fifth-year student who transferred to Florida for his final season of eligibility. Barry graduated from the College of Charleston last summer and did not waste any time heading to Gainesville. However, basketball wasn’t the only thing that attracted him to the University of Florida. Playing at an SEC school and possibly gaining the attention of scouts was important, but Barry was also looking for a university where he could earn his master’s degree in nuclear engineering.

Breakout Star Off the Bench

While Barry has not been a starter this season, he has still managed to make a huge impact for Florida. He really made a name for himself during the game against Georgia. Coming in off the bench, he scored a season high 27 points, helping push the Gators past the Bulldogs in the second half. Barry has been lighting it up as of late and knows what he can provide for this Florida team. He was quoted as saying, “I feel good right now, I think my teammates have a lot of confidence in me and I have confidence in myself.” Barry also spoke on the seven game win streak, saying that what really matters is this next game against South Carolina.

Canyon Barry speaking to the press "7 wins in a row but it's the next game the matters" @cbarry719 on facing South Carolina #Gators pic.twitter.com/f9NWcs1YRD

The No. 19 Florida Gators will be facing the No. 24 South Carolina Gamecocks. Both teams have yet to lose a game in conference play. This SEC matchup is set for tonight at 6:30.

Born and raised at the ballpark! Typically quiet- until it comes to sports. I'm a South Florida native with a passion for baseball nearly as strong as my faith. Grew up in garnet + gold, turned out sporting orange + blue. Likely to be found with a camera. And yes, I take food pictures.
@victoriarossman
Previous 2017 Hall of Fame Announcements
Next Examining the Baseball Hall of Fame Case for On-The-Bubble Players