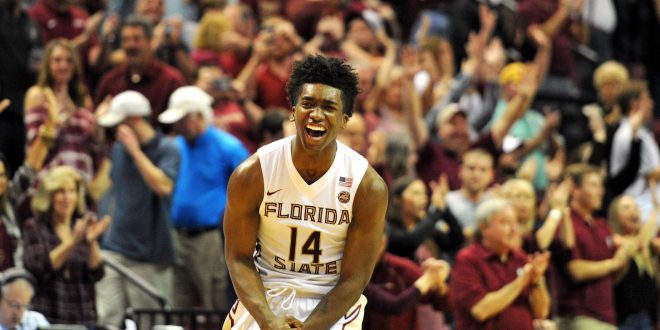 The Florida State Seminoles will kick off a three-game road trip tonight. FSU will look to stay hot as they face three ACC opponents in a row. The Seminoles will start their trip in Atlanta against Georgia Tech.

Florida State’s road trip begins tonight against the Georgia Tech Yellow Jackets. The Seminoles are coming off a rather emotional win over Louisville this past weekend. However, head coach Leonard Hamilton says he is not concerned about those emotions carrying over into tonight’s game. He feels the team is confident in who they are and will be ready to go. Though Georgia Tech is not ranked, they did beat UNC by double digits. If there’s one definite truth about college basketball, it’s that its unpredictability never fails to provide surprises.

Not only will the Seminoles be on the road for three games in a row, they will be facing three ACC opponents. After Georgia Tech, FSU will travel to take on Syracuse and Miami (FL). The Seminoles have had no major issues with ACC teams so far, as they have gone 6-1 in conference play. Their sole loss in their conference came against the UNC Tar Heels. While UNC and FSU lead the ACC conference, Florida State head coach Leonard Hamilton says the team is remaining humble.

Tonight’s game from Atlanta will tip off at 7.

Born and raised at the ballpark! Typically quiet- until it comes to sports. I'm a South Florida native with a passion for baseball nearly as strong as my faith. Grew up in garnet + gold, turned out sporting orange + blue. Likely to be found with a camera. And yes, I take food pictures.
@victoriarossman
Previous Former Gators Brian Poole, Keanu Neal Ready for Super Bowl LI
Next Lightning Finding their Identity?