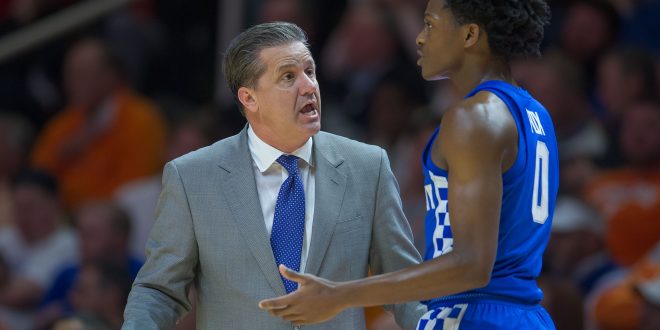 SEC-Big 12 Challenge Preview: No.2 Kansas Set to Battle No. 4 Kentucky

The main game of the Big 12 SEC Challenge is the No.2 Kansas Jayhawks vs the No.4 Kentucky Wildcats.

This is the fourth season of this challenge. The challenge takes place in the middle of the basketball season, which is during conference play. It could be argued that this challenge disrupts the conference schedule. Head Kentucky basketball Coach John Calipari says it’s tough to have this game around conference, but they have to just focus on each game at a time.

Both programs are the most winningest teams in college basketball history. They are also coming off of upset losses. Kentucky leads this series 22-7 and is 7-1 all time against the Jayhawks in Lexington. The last time these two teams met in Rupp Arena in January of 2005 where Kansas won 65-59. The Jayhawks and Wildcats also met recently last season with a final score of 90-84 in Kansas.

"There's nobody who can get to the basket like @Swipathef0x. He's the quickest guard in college basketball" says @RealJayWilliams pic.twitter.com/dVEM1V2rOF

Kansas senior point guard Frank Mason III leads the Jayhawks with points and assists leading with 19.9 and 5.2 respectively.  Fellow guard Devonte’ Graham help to lead as one of the best backcourt duos nationally. Kansas averages 84.6 points per game and leads the Big 12 and is ranked seventh in the country with a field goal percentage of 49.8.

Another one to look out for is Freshman guard Josh Jackson who is coming off of a career tying 22 points at West Virginia. He was 4-for-4 from the three point range and was Big 12 Newcomer of the Week four times this season. He ranks first in the conference for freshmen and eighth in the league with a 15.5 scoring average.

Despite this loss against West Virginia,  Calipari says that it was just a “one off” game and that the Jayhawks are legit.

For the Kentucky Wildcats guard Malik Monk leads the Big Blue in points with 21.9 points per game and guard De’Aaron Fox averages 16.2 ppg. He leads the team in assists with 5.9 per game. They are two very fast players who push the tempo and score on averages faster than 342 other NCAA teams.

"They go from defense to offense faster than probably anyone in college basketball." –@CoachBillSelf on Kentucky #kubball pic.twitter.com/iubtfuqbhp

The Wildcats and Jayhawks are good at forcing turnovers and playing above the rim. The Jayhawks most recent loss to WVU had to do with Kansas not defending. Kansas had problems during that game defending the drive as well.  Kentucky to their advantage could use their speed to run circles around the Jayhawks with Fox’s driving and creating chances for his teammates to shoot at any area of the court.

The most anticipated game of the Big 12-SEC Challenge of the Kentucky Wildcats and Kansas Jayhawks will be in Lexington, Kentucky at the Rupp Arena on Saturday at 6:15. The game will be televised on ESPN.

Previous Florida Ready for Big Push in Final Recruiting Weekend
Next No. 25 Florida Takes on Oklahoma Saturday in the SEC-Big 12 Challenge