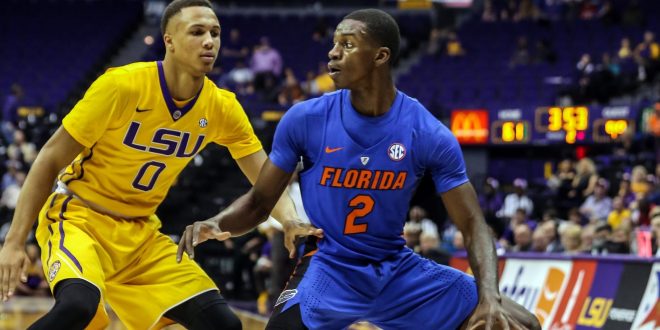 No. 25 Florida Takes on Oklahoma Saturday in the SEC-Big 12 Challenge

When the SEC-Big 12 Challenge was planned, the Gators’ visit to Norman, OK was viewed as a marquee matchup with post-season implications on the line. Come January 27, the day before the game, Florida is 15-5, the 25th ranked team in the country, and one of the top 26 teams in the country in both offensive and defensive efficiency. The Sooners have not had the same fate. Oklahoma is 8-11 and tied for last in Big 12 play. OU, who has won at least 20 games in each of Lon Kruger’s past four seasons, has now lost seven of their last nine games. The two teams haven’t met in over 20 years, but will face-off on Saturday at 2 p.m. 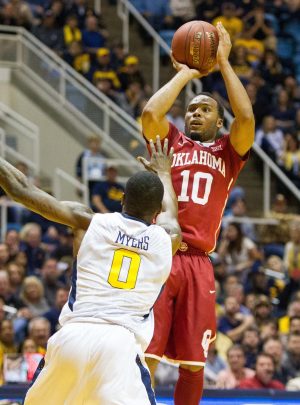 Of all the negatives surrounding Oklahoma this season, Jordan Woodard is not one of them. The senior guard is averaging 17.3 points and 5.3 rebounds per game on 41.8 percent shooting from the field. Woodard struggled in his most recent game, scoring only eight points in a loss against Texas. However, he notched at least 20 in the three games before. He’s fourth in the Big 12 in points per game and has at least three steals in three of his past four games.

Don’t Judge a Book By Its Title

Kristian Doolittle has certainly done more than his fair share in the Sooners’ last three games. After going a month and a half without scoring more than nine points, Doolittle has finished with at least 12 points in each of his last three games. Most recently, he went 10-for-18 from the floor against Texas. He led the team with 29 points in that game and went 4-of-5 from downtown.

At 6’7″ and 236 pounds, Doolittle has the ability to dominate in the paint against smaller defenders. He’s only had less than five rebounds four times this season, and has 10 and 15 rebounds in his past two games, leading to back-to-back double-doubles.

Before Donovan, There Was Kruger

Lon Kruger spent six seasons with the Florida Gators before leaving Gainesville for Illinois. In his six seasons at Florida, Kruger was named SEC Coach of the Year twice in 1992 and 1994. Kruger also led the Gators to their first-ever Final Four appearance in 1994. He’s now been at Oklahoma for six seasons, taking the Sooners to the Final Four last year. He’s made the NCAA Tournament in four of his five completed seasons at OU, but with an 8-11 record thus far, may be too far down and out this year.

Maybe the nine o’clock start helped, but Florida set a school-record for three-pointers made in their most recent 106-71 win over LSU. The Gators knocked down 19 of their 33 shots from downtown as Devin Robinson went 5-for-8 and Eric Hester went 5-for-5 from downtown. Despite the performance, Florida is still only shooting 35.7 percent from downtown, and as Mike White said during the SEC teleconference, are not a three-point shooting team.

Per UF, Barry was limited in practice on Friday and is a game-time decision against Oklahoma on Friday afternoon. Barry sat out the Gators’ last game against LSU with a sprained ankle he suffered in practice. This season, the graduate transfer is the team’s second-leading scorer, averaging 12.4 points and 3.3 rebounds per game off of the bench. Despite a poor performance against Vanderbilt, Barry has scored at least 13 points in five of the last six games. Coach White described how important of an addition Barry has been this season early on Thursday morning.

In Joe Lunardi’s latest Bracketology, Florida is a No. 5 seed, facing the winner of the Texas Tech-Clemson play-in game. The Round of 64 matchup would take place in Milwaukee. Last week, the Gators were a No. 6 seed.

Saturday’s game between Florida and Oklahoma tips off at 2 p.m. in Norman and can be seen on ESPN with Brent Musburger, Dick Vitale and Kaylee Hartung on the call. If you’re able to, I’d highly suggest tuning in for what might be Brent Musburger’s last ever Florida broadcast. Musburger called Florida’s 2008 football championship on the radio and many other football and basketball games featuring the Gators. As always, you can listen to the game on the Gator IMG Sports Network with Mick Hubert and Bill Koss.

We got the chance to catchup with a few #Gators last night in OKC #GatorsAlways #OneTeam pic.twitter.com/vfcj5LkD7H