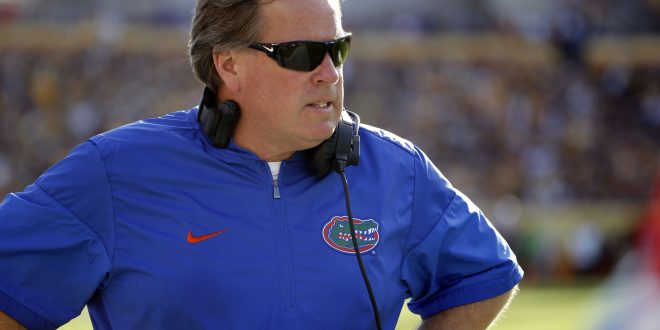 When assessing the recruiting situation, Florida football fans are understandably restless and it wouldn’t be wrong to assume that the coaching staff is too. With only four days left until recruits put ink to paper on National Signing Day, the Gators are still scrambling to assemble a strong 2017 class.

According to 247sports.com, Florida’s 14 commits comprise the 30th ranked 2017 class, way behind FSU (#5) and Miami (#14) in-state. Over the last 48 hours, they’ve endured some tough decommitments. Four-star Offensive lineman Kai-Leon Herbert, who was scheduled to meet with the Gators this weekend, committed to Miami. In the same day, 4-star cornerback Elijah Blades decommitted and Nebraska is the favorite. Many considered Blades either the best or second best recruit of Florida’s 2017 class. His departure prompted some passive-aggressive tweets from current and future Gators.

We good on y'all #GatorNation

Can't be apart of DBU if u scared of competition

Blades promptly took it in stride and responded.

But it’s easy to understand why there might be some underlying concern. Former coach Will Muschamp, despite some on-the-field woes, managed to recruit a top-10 class. Head coach Jim McElwain has yet to crack a top-10 class in two seasons (granted, he only had about a month in his first season). How do two back-to-back SEC Championship appearances and a bowl win not spark more momentum for the program?

Blake Alderman thinks this time around, it might have something to do with the lack of an offensive line coach. Mike Summers left the team earlier this month to join the Louisville staff. The uncertainty around the position scared off someone like Zalontae Hillery, a 3-star offensive tackle.

Popular opinion is that Florida will make its best pitch to 13 visiting recruits in Gainesville this weekend and have no choice but to cross their fingers for a big splash on NSD. Two recruits that would represent dream flips are 5-star DE LaBryan Ray and 4-star DE K’Lavon Chaisson. According to 247’s Crystal ball predictions, though, the Gators are a long shot. Ray, an Alabama native, is expected to sign with the Tide. Chaisson, a Houston native, is heavily leaning Texas. But official visits from both always leave room for hope.

The loss of Blades and the unlikelihood of landing Ray or Chaisson make DB Brian Edwards, a 3-star commit, a big priority. The Gators will also be avidly trying to flip brothers Brandon and Breyan Gaddy, two DT from Virginia Beach. The two visited the campus on Jan.27, according to 247 sports. Tennessee poses the biggest threat to land them.

Defense is certainly the biggest focus this last weekend. The quartet of DT Elijah Conliffe, DB Chris Henderson, LB Nick Smith and lineman T.J. Slaton are all uncommitted and could represent a major coup for Florida if they’re all reeled in. Henderson and Slaton are considered likely for Florida.

Four-star wide receiver James Robinson is also on the team’s radar. If the Gators can nab the majority of these guys, they can vault into a top-20 class.

@EddyAlmaguer
Previous Jeff Gordon Retired… Or Is He?
Next SEC-Big 12 Challenge Preview: No.2 Kansas Set to Battle No. 4 Kentucky