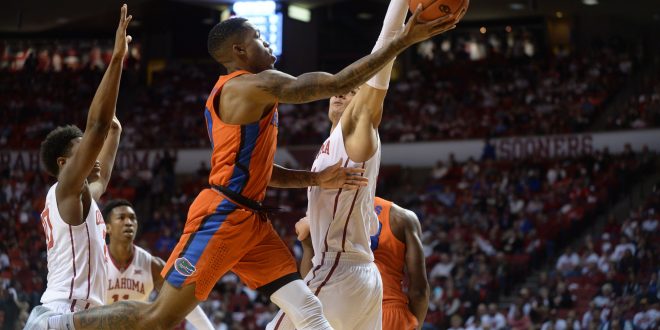 Four different Gators scored at least 12 points, including Kevarrius Hayes (20), Canyon Barry (15), Devin Robinson (13) and Kasey Hill (12). Hayes finished with a career-high in both points and rebounds (9), but couldn’t attain the first double-double of his career. Kasey Hill finally bounced back after a rough stretch, filling out the box score with 12 points, eight assists, four rebounds, two steals and only one turnover. Hill now has a steal in 12 consecutive games.

After the game, Florida Head Coach Mike White discussed the team’s terrific overall effort and Kevarrius Hayes’ career day. He also praised Kasey Hill and Chris Chiozza for their phenomenal ball movement, featuring 12 assists and only two turnovers, along with Canyon Barry’s ability to bounce back quickly from a sprained ankle.

Florida outshot Oklahoma, 43 percent to 28 percent, from the field, and 38 percent to six percent, from beyond the arc. The Gators outrebounded the Sooners, 50-39, notching 37 defensive rebounds. UF’s bench finished with 39 points, scoring only 13 points less than OU’s entire team. The Gators moved the ball well for the second straight game in a row, dropping 16 assists on 27 made baskets.

Oklahoma’s most volatile scoring threat, Jordan Woodard, was held to zero points on 0-for-7 shooting. Kristian Doolitee, the Sooners’ other premiere scoring threat as of recent, finished with eight points and nine rebounds.

Florida wins at Oklahoma by 32 just days after beating LSU in Baton Rouge by 35. The road has brought out the best in the Gators this week.

Oklahoma got off to a quick 5-0 lead after Florida opened up 0-for-3 from the floor. KeVaughn Allen ended the drought with a contested three-pointer to diminish the Sooners’ lead to two with 17 and a half minutes left in the first frame.

After seven minutes of play, neither team had hit more than two shots from the floor. Canyon Barry ended that run after knocking down a three-pointer immediately after being subbed in. The Gators took their first lead of the game off of that shot.

With ten minutes left in the first half, the Gators picked up their tentht foul of the first twenty minutes, putting Oklahoma in the double-bonus the rest of the day. The Sooners knocked down two free throws off of Florida’s tenth team foul, tying the game at 16.

Canyon Barry once again provided instant offense off the bench, starting the game 3-for-3 from the field with eight points in only six minutes played.

The Gators closed the first half on an 18-4 run to take a 43-28 lead into halftime, their biggest of the first frame. Kevarrius Hayes and Canyon Barry each had 15 points. Florida outshot Oklahoma from the field, 44 percent-24 percent. The Gators had as many bench points in the first half as the Sooners had total points.

Florida and Oklahoma both knocked down 12 free throws in the first half, but the Gators had two more attempts. UF also had eight assists on their 14 makes in the first frame. The Gators turned the Sooners’ six first-half turnovers into 10 points.

The Gators opened up the second half on a 7-0 run, crashing the offensive glass successfully against a slow-to-start Oklahoma team. Florida took their first 20-point lead of the game just two and a half minutes into the second half.

With just under ten minutes left, the Sooners pulled to back within 13 points, as Oklahoma held Florida to just about three and a half minutes of scoreless basketball.

UF went back up by 20 points on a Devin Robinson three-pointer. Two quick free throws to follow by John Egbunu put the Gators up 72-50 with 4:43 left in the contest.

The Gators will have four days off before taking on the Missouri Tigers in Gainesville. Mizzou is currently the worst team in the SEC, with a 0-7 record in conference play. The Tigers are 5-14 overall and haven’t won since December 6.

Seventh #Gators player in last month with 15+ in a game.