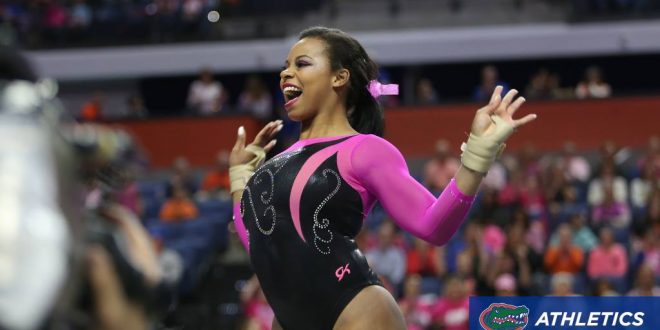 The Florida gymnastics team celebrated its 11th annual Link to Pink meet with a win against the Auburn Tigers on Friday in Gainesville. The third ranked Gators defeated 16th ranked Auburn 197.700-196.400. Top performers of the night for Florida were Alex McMurtry, Amelia Hundley, Rachel Gowey and Kennedy Baker. Gator coach Jenny Rowland is very pleased with how the team continually builds from each meet.

Gators gymnastics started the evening with their first rotation on the vault. Amanda Cheney took the place of Kennedy Baker for this event. Alex McMurtry finished with the top score overall of 9.950 in this category. McMurtry received the same score as she did last week against North Carolina on the vault. However, this week she performed a yurchenko double, which is much harder than a yurchenko full, which she performed last week. Florida ended the rotation with a 49.400, while Auburn ended with a 49.050 on the bars. This category helped to bring the Gators on top early in the evening.

For the second rotation, Florida moved onto the uneven bars. Amelia Hundley led the event with a 9.950 making her the top performer. The Gators were able to keep the lead against the Tigers as they entered the third rotation with the overall score of 98.875-98.075.

Florida started the third rotation on the beam with Auburn on the floor. Rachel Gowey was the top performer for this event with a score of 9.925. This is her personal best on the beam. Gowey was happy to deliver a performance she had been working hard for. The Gators continued to dominate the Tigers as they ended the rotation with an overall score of 148.125-147.250.

Florida was on floor for the fourth and final rotation. Kennedy Baker landed the top score in this category and the highest score of the night with a perfect 10.0. This was the first 10.0 for the Gators this season. The Gators finished the Tigers off with a final score of 197.700-196.400.

The Gators will head to Tuscaloosa next Friday to take on Alabama at 8:30 p.m. You can catch the meet on SEC Network.

Sydney is a senior studying telecommunications with a specialization in sports media at the University of Florida. She is a multimedia sports reporter for ESPN 98.1 FM/850 AM WRUF and WUFT-TV.
Previous Kennedy Baker Earns Perfect Score and Rachel Gowey Leads the Beam As Gators Top Auburn In Gymnastics
Next No. 25 Florida Dominant for Second Game in a Row in 84-52 Win over Oklahoma