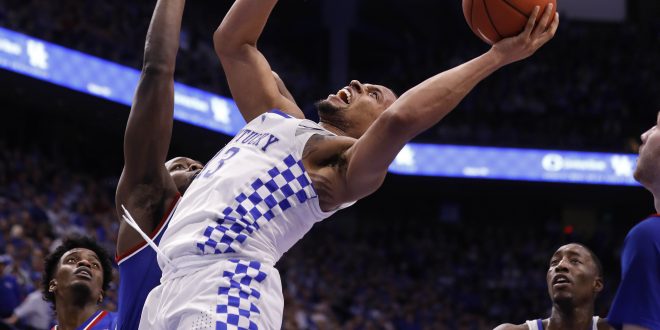 Kentucky Looks to Bounce Back Against Georgia

The No. 8 Kentucky Wildcats are sporting back-to-back losses as they enter Rupp Arena to face the Georgia Bulldogs (13-8) Tuesday night.

In the game against Kansas, UK committed 17 turnovers, a season high. In the last four matchups, Kentucky opponents have averaged 20.3 points off turnovers.

The Wildcats (17-4) will be at home Tuesday night, which takes a little pressure off, but in order to get back to its winning ways and escape its first three-game losing streak, Kentucky needs to come in tough and avoid turnovers.

Cal: I'm not panicked. I want to win – you know me well enough – I'm fighting all through the game. I watched it, this stuff's all fixable

Dawgs on A Roll

Georgia has picked up some momentum, pulling off a significant win over Texas. The Dawgs surged from a nine-point deficit entering the second half to top Texas, 59-57. UGA’s victory helped the SEC tie the SEC/Big 12 Challenge at 5-5, and it snapped a two-game losing streak for Georgia.

Georgia used a strong 2nd half to complete the comeback against Texas! Checkout the highlights.#Big12SEC#TEXvsUGA#RaiseTheFlag pic.twitter.com/xj44793E96

The Bulldogs are led by forward Yante Maten, who tallies 19.7 points and J.J. Frazier who averages 15.5 points per game.

Maten ranks second in the SEC in scoring and third in rebounding (7.7 per game). He enters the contest against Kentucky with 20-plus points in the last eight games.

Juwan Parker will also be in action after missing the last season and a half with an Achilles injury. He has started all but one game and is third on the team in scoring, averaging 9.7 points.

Kentucky faced a disappointing loss to Kansas on Saturday, coming up six points short. The 79-73 defeat now has the Wildcats on edge and ready to improve on defense.

Wildcat head coach John Calipari says they have been a low turnover team until the last three games.

Freshman Malik Monk leads the league in scoring. Although he averages 22.5 points, Monk’s shooting has not been at its best. Monk shot poorly from the deep the past couple games, hitting 23 percent of his 3-pointers at Tennessee, and 33 percent from the deep against Kansas.

Calipari says there was a point in the game against Kansas where Monk didn’t get a shot for seven minutes.

Other Wildcat leading scorers to keep an eye on are De’Aaron Fox, who is contributing 15.9 points per game, and both Isaiah Briscoe and Bam Adebayo who chip in 14 points per game.

Kentucky leads the all-time series over Georgia 121-26 and have won six straight over the Bulldogs.