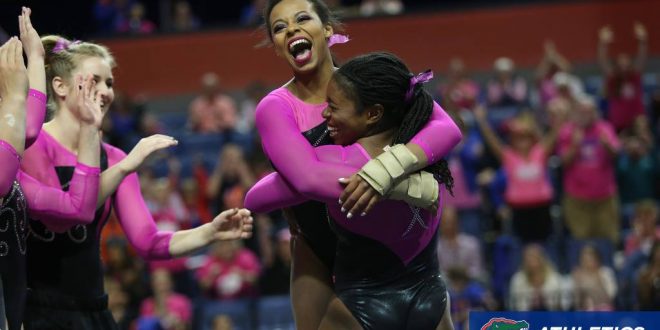 No. 3 Gator Gymnastics at No. 6 Alabama for Dual Meet

The No.3 Florida Gator Gymnastics team is in Tuscaloosa, Alabama to take on the Alabama Crimson Tide Friday. This match up will be the nation’s top dual meet of the weekend. Much like last week’s home Link To Pink meet the Gators will compete in Alabama’s 13th annual Power of Pink meet to raise awareness for breast cancer.

Sixth ranked Alabama is heading into this match after a two meet weekend last week. Alabama lost 195.325-195.825 to Arkansas last Friday but bounced back the following Sunday when they defeated Auburn, 195.850-194.675.

According to the Road to Nationals ranking, Oklahoma is currently number one, followed by LSU, Florida, Utah and UCLA, respectively.  Alabama is sixth.

Tune into SEC Network at 8:30 p.m. for coverage of the meet.

Sydney is a senior studying telecommunications with a specialization in sports media at the University of Florida. She is a multimedia sports reporter for ESPN 98.1 FM/850 AM WRUF and WUFT-TV.
Previous No. 24 Florida Men’s Basketball Dominant For Third Straight Game in 93-54 Victory over Missouri
Next West Virginia Running Backs Coach to Join Gators, McElwain’s Staff