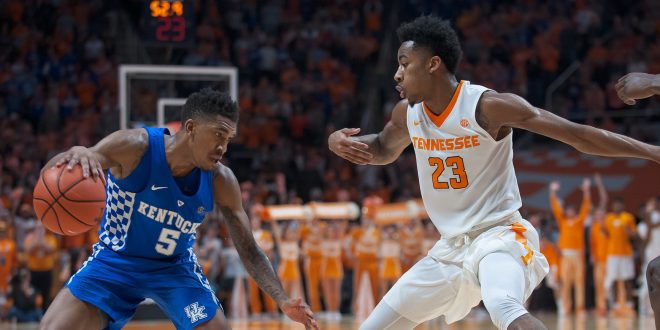 The No. 13 Kentucky Wildcats will host the Tennessee Volunteers on Tuesday.  During their first meeting this season, the Volunteers pulled off the thrilling upset with an 82-80 win in Knoxville.

The Wildcats sit atop the SEC rankings, tied with Florida and South Carolina. They are coming off of a win this weekend over Alabama, 67-58.

The last time UK and Tennessee met, Tennessee took advantage of UK’s sloppy mistakes and poor performance from beyond the arc.  The Vols caused five turnovers late in the game to give themselves some crucial possessions down the stretch.  Kentucky looks to redeem itself on Tuesday night, but they will need to bring a solid defensive gameplan.  Last time around, freshman Malik Monk led the team in scoring with 25 points despite the upset.

During their last meeting with UK, Robert Hubbs III led his team with 25 points, seven rebounds, and two assists.  In the past week, Tennessee had a strong win against Ole Miss, but followed it up with a tough loss to UGA.  Despite the defeat, forward Grant Williams still earned SEC Freshman of the Week honors after his performances.