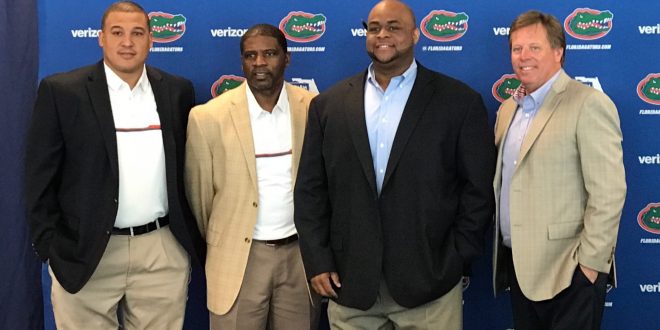 Ja’Juan Seider’s story to joining the Florida Gators is somewhat different compared to the other assistant coaches though. Football head coach Jim McElwain wanted to hire Seider when he orginally joined the Gators in 2015. however, when McElwain tried to hire Seider in 2015, Seider’s son was battling cancer. Being the family man that he is, Seider could not take the job and move his family at that time. Seider’s son beat cancer during the summer of that same year. Now that the timing is right, Seider says his son is very excited to be moving back to Florida and can’t wait to start spring ball.

Seider is a Florida native. He is originally from Belle Glade, Florida. Seider went to school and played quarterback for West Virginia University before he transferred to Florida A&M his senior year. He started his coaching career on a high school level working for Glades Central, Palm Beach Lakes, and Lake Worth from 2001-2008.

Seider then moved to West Virginia University where he worked as a quarterbacks graduate’s assistant for two years before moving to Marshall in 2010. At Marshall, Seider took over the running backs and recruiting coordinators job for two years. In 2013, Seider moved back to the position of running backs coach at West Virginia University where he has spent the past four years.

Head coach Jim McElwain addressed the media today in a football press conference to discuss the newest coaching additions. Prior to the press conference, each of the Gators newest assistant coaches discussed their new positions. Seider believes every team should have a lead running back, but if you recruit well the other running backs shouldn’t be far off from the lead. Ja’Juan is already watching film and getting to know Florida’s three running backs on the roster. He wants to build trust with the players before making an opinion based off of film.

Sydney is a senior studying telecommunications with a specialization in sports media at the University of Florida. She is a multimedia sports reporter for ESPN 98.1 FM/850 AM WRUF and WUFT-TV.
Previous No. 1 Gator Softball Looks Forward to Home-Opening Weekend
Next New Offensive Coach Brad Davis Looks to Get Back to Basics