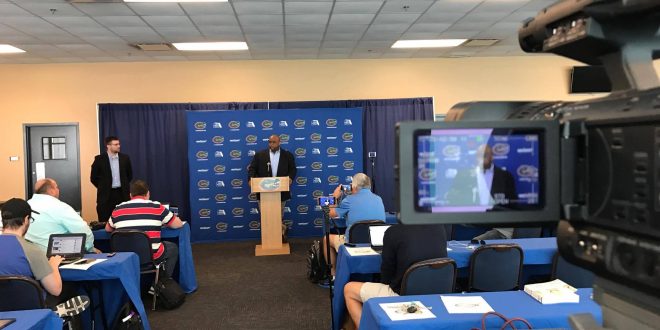 New Offensive Coach Brad Davis Looks to Get Back to Basics

GAINESVILLE, FL – Brad Davis was sitting in a dentist chair getting his teeth cleaned when he received a phone call he will never forget. ” I was getting my teeth cleaned when Coach Mac called and offered me the job, I was very fortunate my dentist was understanding”, said Davis.

Now that Brad Davis has settled down in Gainesville and his new coaching gig has finally sunk it, he is ready to get to work on reforming this offensive line that is only losing one player with left tackle David Sharpe. The first thing Coach Davis said he wanted to work on with the offensive line is everything that they already know—the basics.

#Gators OL coach Brad Davis says he's biggest challenge so far is "getting as close to my players as much as I can" pic.twitter.com/9HVxLjDdQY

It was only five months ago that Brad Davis was standing on the sidelines of Florida Field, on the opposite side of the Florida Gators. He served as the offensive line coach and run game coordinator for North Texas, who the Gators faced on September 17.

It has become very public that Florida needs some work on their offensive line, something that Davis understands and is willing to put the work in to improve the system if his players are. He says playing for the University of Florida creates a standard that every player should take seriously. The offensive line position became available when former OL coach Mike Summers took an offensive line coaching gig at Louisville.

The Gators are returning a solid core of offensive lineman for the 2017-2018 season: Martez Ivey, TJ McCoy, Tyler Jordan and Fred Johnson. Davis says he can’t wait to get to work once spring ball starts on February 28. For now, he just wants his players to buy into this successful program.