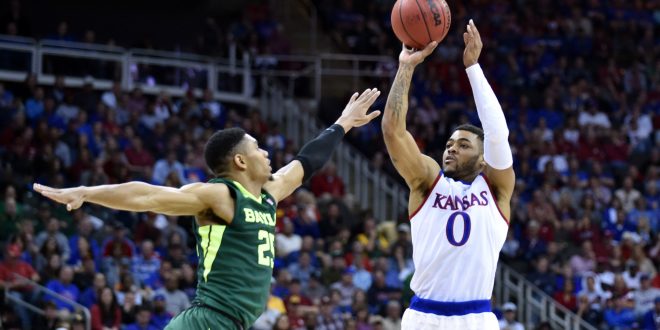 As the regular season comes to a close, several teams continue to fight for conference superiority. One game to look out for is the top-five match up between Kansas (third in the AP poll) and Baylor (fourth). Both teams already played each other once, with Kansas emerging victorious 73-68.

Kansas and Baylor are first and second in the Big 12, respectively. Kansas lost its first game of the season against Indiana in overtime, but has since rebounded to a 23-3 record. Baylor won its first 15 games and posts a 22-4 record.

Kansas and winning are synonymous with each other especially when it comes to the Big 12. The Jayhawks have won 12 straight Big 12 regular-season titles and can certainly make it a 13th straight especially with players like Frank Mason III (20.2 points per game, 4.3 rebounds, 4.9 assists and Josh Jackson (16.5 points, 7.2 rebounds, 3.0 assists.)

However, if there’s one team that can end Kansas’ reign, it’s Baylor. The Bears have one of the best big men in the Big 12 in Jonathan Motley. The junior forward has carried his team with 16.7 points a game and 9.5 rebounds which leads all conference players. Motley had a fantastic game in Baylor’s loss to Kansas, posting a double-double with 16 points on 63.6 percent shooting and 10 rebounds.

*Efficiency stats based on Kenpom.

Barring major collapses and other circumstances, it’s obvious both these teams are going dancing. When comparing their resumes, both appear to pass several tests. They’re both ranked in the top 2 of ESPN’s RPI list (Baylor number one, Kansas number two). Both teams have several wins against top-100 RPI teams and both have played respectable schedules (Baylor Strength of Schedule fourth, Kansas 16th). If there’s one thing that’s going against both teams, it’s the fact that a Big 12 program has not won the national championship since Kansas won it back in 2008.