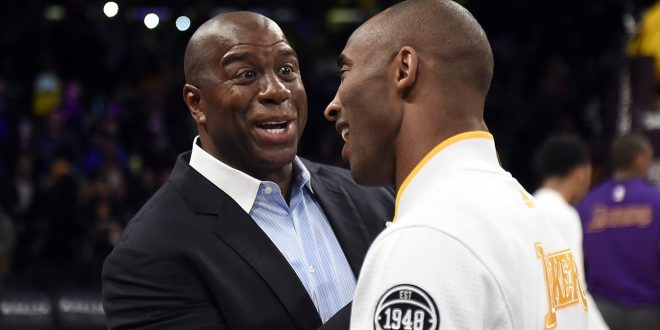 Stuck in one of the worst stretches in franchise history, Buss spared no expense, firing her brother and executive VP Jim Buss as well as GM Mitch Kupchak on Tuesday. It paved the way for former Laker great Magic Johnson to become the team’s new President of Basketball Operations.

Jeanie was adamant that what everyone saw in the last three years was not Laker basketball, and she even admitted this front-office shake up came later than it needed to.

In a press conference on Tuesday, Johnson flashed his 1000-watt smile and spoke about the his plans for the team. First and foremost, he cautioned that the rebuild takes time. The Lakers are a paltry 67-155 since the start of the 2013-14 season and after Kobe Bryant’s departure, there’s been little reason to care about the team. Jeanie echoed Johnson’s sentiment. They’re not trying to recreate the Showtime Lakers, the 1980s powerhouse team that made the Finals eight times in 10 years and won five titles.

The team has a decent core of young players with which to build around. PG D’Angelo Russell, PF Julius Randle and SF Brandon Ingram are all homegrown players that can represent the next wave of success. Johnson has no plans to replace head coach Luke Walton, citing his value in helping young guys come along. LA hired Walton, an 11-year Laker player who won two championships with the team, in April of last year.

Johnson said he was already in the process of searching for a new general manager to replace Kupchak, and spoke about the traits he wants in a GM. Kupchak, one of the championship members of the 1985 Showtime Lakers team, had held his title since 1994.

There is a front runner according to Yahoo’s Adrian Wojnarowski.

Pelinka is a well-established agent who represented Kobe Bryant and is also in charge of Chris Bosh, James Harden, Dion Waiters and more. Pelinka would need to divest from his business and the fallout from that is already happening.

While Johnson cautioned that a rebuild won’t happen overnight, he’s not sitting on his hands, either. On Tuesday the team traded sixth man Lou Williams to the Houston Rockets in exchange for Corey Brewer and an unprotected first-round pick. Williams is in the midst of his best season in his 12-year career, averaging 18.6 ppg with a .385 3-point field goal range.

Thanx for the love L.A, I've enjoyed my stay.

Brewer is on the opposite end of Williams. He’s struggling with a career-low 4.2 points per game. The former Florida Gator has $7.6 million left on his contract.

There have been a flurry of rumors surrounding All-Star Pacers forward Paul George. The risk associated with him is that he’s expressed interest in returning to Indiana, but there’s certainly a chance he’d join the Lakers, his hometown team, when he becomes a 2018 free agent. If Johnson can show progress toward creating a championship team, George’s decision could be big.