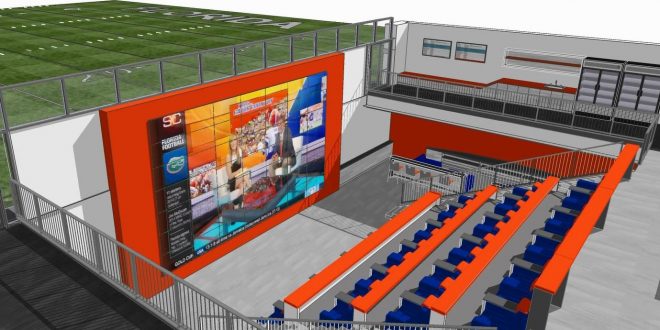 The University of Florida Athletic Association announced that HOK will design a new $60 million football complex.

The new three-story, 130,000 sq.-ft. project will consolidate Florida football’s operations. In addition, it’ll add a new dining hall for all UF student athletes.  The facility will be built adjacent to 2nd Avenue and across from the Sanders Practice Fields and indoor practice facility.  The new project will house the offices for Florida football’s coaches and staff to provide easy access for the players.

According to the plans, the entry lobby will serve as the centerpiece of the building by reinforcing the Gators’ legacy and brand.  A players’ lounge will serve as a space for the student-athletes to relax off the field with amenities such as a nutrition bar, meeting spaces, and games.  The designs also include an immersive, 3D hologram training environment, as well as a hydrotherapy room.  There are also plans for a state-of-the-art strength and conditioning center with a cardio balcony and training room.  Because the project is focused on the future of Gator football, plans also include a separate recruiting room.

According to a press release from the UAA, Florida Athletic Director Scott Strickland says, “This football operations project will have a significant impact on the daily experience of our student-athletes and staff.  It represents a substantial commitment on behalf of Florida Athletics and Gator Boosters to ensure that our football coaches, players and staff are able to perform as efficiently as possible. And the new dining hall will benefit all 500 of our student-athletes.”

Check out the conceptual video below:

HOK is a global architectural and engineering firm from Kansas City, MO.  HOK’s Sports + Recreation + Entertainment practice has designed major college and professional sports venues.  Some of their work includes Clemson’s football operations facility, Atlanta’s Mercedez-Benz arena and the Philips Arena renovation, the renovation of Hard Rock Stadium in Miami, among many others.

According to the UAA’s press release, regional HOK Sports + Recreation + Entertainment leader Algen Williams says, “The University of Florida has a long history of developing champions.  This project will create a facility that supports the university’s mission of forming well-rounded student-athletes. We look forward to using design to help tell the story and define the future of the Gators’ celebrated football program.”

The football operations facility is a part of the UAA’s $100 million facility upgrade plans.  Major improvements will also be made to McKethan Stadium and Katie Seashole Pressly Stadium. These are of course the home of Florida baseball and softball, respectively.

The next step for this project is to choose a construction management firm.  The new complex is scheduled to break ground in late December 2017 with an expected opening in 2019.