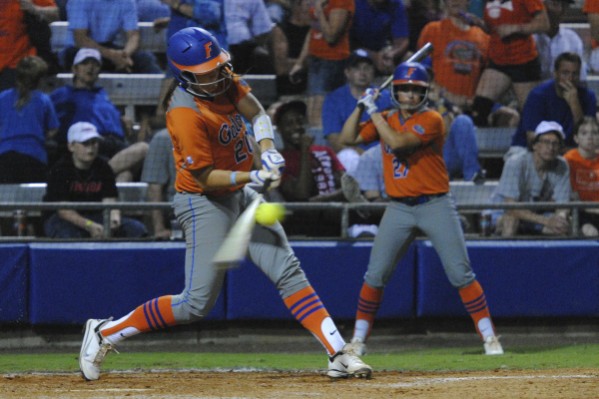 Gators Softball went 26-6 this past season. Michelle Moultrie (not pictured) is currently representing the USA in the London Olympics.

The University of Florida softball team is headed west. The Gators will face five other teams over a 3 day period in their last tournament. The Gators start the tournament on Thursday at the Judi Garman Classic in Fullerton, California.

Kelly Barnhill and Delaine Gourley gave the Gators their sixth shutout over the last seven games. Gourley was selected as one of thirty collegiate softball student-athletes from around the country as a candidate for the 2017 Senior CLASS Award on Tuesday. Gourley has been noticed of her excellent leadership skills on and off the field. No doubt those will shine through during their tournament this weekend. Barnhill has a scoreless inning streak with 34 innings after allowing no hits and just one walk with 11 strikeouts in the last win over Lehigh.

Keeping the runs down is key. The Gators have not allowed an earned run in regulation since the Aquafina Invitational against Maryland. That’s the last seven games and only one run allowed. This team has great defense and knows how to play the field.

The Hawkeyes have been on a losing streak, but they’ve been able to put points up on the board.

When this team wins, they win by a lot. Their ability to make offensive plays at the right time is something to lookout for.

This team is the biggest competition for the Gators. They are currently on a winning streak of 9 games.

This team is right in the middle. They are 13-3, but with their recent loss to Florida State, the Gators should be able to handle them easily.

This team should be the least of the Gator worries. However, Northwestern is on a winning streak after beating N.C. State and Houston.

The Gators’ first game is against the Hawkeyes on Thursday at 3 p.m.