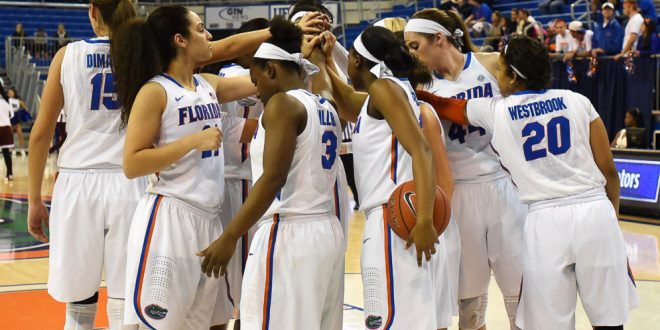 The Florida Women’s basketball team passed their first test of the SEC Tournament by beating Arkansas in the first round.  Florida finished 71-61 over the Razorbacks.  The Gators entered the tournament as the No. 11 seed and faced a No. 14 seed Arkansas team that was on a 10 game losing streak.

Florida played an impressive first quarter.  Junior Brooke Copeland score two three-pointers early, which helped the Gators hold a 20-13 lead after the first quarter, but the second quarter slowed down the game significantly.  Florida fell behind on defense, and the Razorbacks came back to tie the the game at 29 by the half. Florida assistant coach Shimmy Gray-Miller said head coach Amanda Butler challenged her team to pick up the pace on defense in the second half.

It seems Butler’s challenge was the push the Gators needed.  At the start of the third, Junior Dyandria Anderson scored two layups early to get the Gators ahead.  She stayed hot throughout the second half, finishing with a career-high 19 points.  Gray-Miller says Anderson’s energy affects the way the entire team plays.  The Gators went on a 23-8 run in the beginning of the third, giving Florida a clear lead.

Another advantage after the half: Arkansas switched from playing zone to covering man to man.  Gray-Miller credits this change with Ronni Williams’s performance in the second half.  She says it would be hard to find any one defender in the SEC who could stop Williams.  Williams finished with a double double.

The Gator defense rose to Butler’s challenge and out-rebounded the Razorbacks 50-32 overall.

Florida secured their spot against No. 6 seed Texas A&M in Round 2 of the tournament.  Although the Gators are proud of their performance against the Razorbacks, there won’t be much time for celebration.  Gray-Miller says the team will spend the evening studying film to prepare defensively for Texas A&M tomorrow.  Florida is 0-2 against the Aggies this season.

Previous Preview: Gator Softball Heads West
Next No. 12 Florida End Home Schedule with a 78-65 Win Over Arkansas on Senior Night