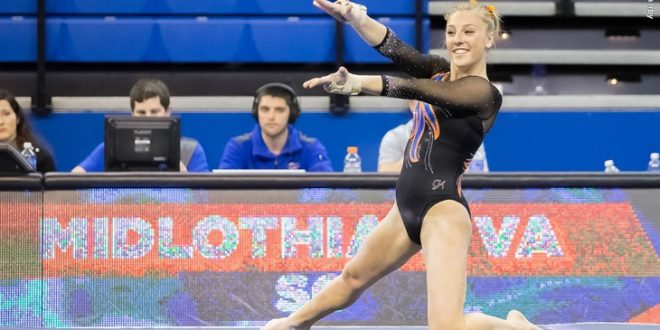 The Fate of Gator Gymnastics SEC Title Decided on Sunday

A trophy will be on the line during Sunday’s gymnastics meet between the Florida Gators and LSU Tigers. The Gators will travel to Baton Rouge to take on the number two team in the country, likely their toughest meet of the season so far. This is the first time an SEC champion will be named during the regular season.

SEC On the Line

The LSU Tigers are currently on top of the SEC standings with a perfect 6-0 record, while Florida is a close second with a 5-1 record. A win or a tie for the Tigers would make them SEC champions and if the Gators pull off the upset and win this meet, they will share the SEC title with the Tigers. Gator coach Jenny Rowland says her team has had a tough week of training and is ready to compete.

This week, Florida completely swept the SEC Weekly Gymnastics Awards which were released on February 28th. Shortly after her perfect 10 on floor, Alex McMurtry picked up her first SEC Gymnast of the Week honor. Rachel Slocum and Amelia Hundley also earned the award this week in their own divisions. Hundley, who was named SEC Freshman of the week, says receiving this reward after a solid meet against Missouri is just icing on the cake.

The meet will air live on the SEC Network on Sunday and the meet can also be streamed on SEC Network +. The pre meet broadcast will start at 3:15.

@@ashlynrsullivan
Previous No.12 Florida Falls to Vanderbilt for Second Time this Season
Next Gators Clinch Series Win Over Columbia