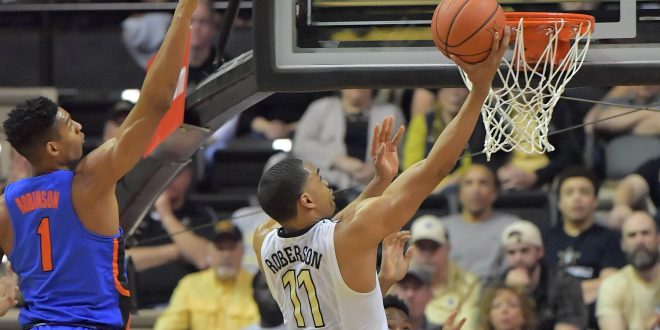 No.12 Florida Falls to Vanderbilt for Second Time this Season

The No.12 Florida Gators came into Saturday’s game locked in as the two seed in the SEC Tournament and a double-bye to go along with it. However, that was the last thing on their mind. The Gators traveled to face a Vanderbilt Commodore team that previously upset the Gators at home earlier in the season. Today’s game was about revenge for the Gators, and it appeared as if they would get just that.

After a Kasey Hill basket to start the game for Florida, the Commodores answered with a 9-0 run over the next four minutes of play which would eventually lead to a Mike White timeout. Florida would come out surging right after.

KeVaughn Allen and Hill scored on back to back possessions to reduce the lead to three. The two teams would continue to trade baskets for a few minutes, but then the Gators caught fire. But more specifically, KeVaughn Allen. Allen gave the Gators their first lead after hitting a pair of free throws with 8:45 remaining in the first half. Allen would then come down to hit three’s on back to back possessions to give put Florida up seven.

Vanderbilt went scoreless from the 9:30 mark, and only made four shots in the final ten minutes of the first half. A Devin Robinson layup at the buzzer would give the Gators a 40-31 lead heading into the half.

KeVaughn Allen lead all scorers at halftime with 13 points on 50 percent shooting from both the field and three point range. The Gators continue to get a spark from Canyon Barry, who came off the bench to score 11 first half points. Jeff Roberson lead the way for the Commodores with 11 first half points, converting on all of his shot attempts while Commodore senior leader Luke Kornet had eight points on 37.5 percent shooting.

Vanderbilt would open the half on another run, this one a seven to two advantage that would lead to another Florida timeout. After a 2:33 scoring drought, Barry scores on back to back possessions to put the Gators back up four.

Then it was Justin Leon hitting on back to back possessions for his only six points of the afternoon. This extended the Florida lead back up to ten, as the Commodores go nearly four minutes without a made basket. However the Commodores would chip away at the lead yet again.

Riley LaChance then caught fire. LaChance connected on a three for his first basket of the game with just under five minutes remaining in the half. Following the made three, LaChance would convert on a pair of free throws and a layup during the next two possessions to give the Commodores a two point lead.

The Gators went cold just like the Commodores did in the first half, failing to convert a basket for nearly four minutes. Vanderbilt would hold on to a two point lead with 30 seconds remaining and wouldn’t relinquish it. The Gators had multiple chances to take the lead or tie the game in the final seconds, but the team elected to attack the basket rather than shooting the three. Chris Chiozza converted on two free throws and a layup during these possessions, but a missed Kasey Hill layup would seal it for the Commodores.

The Commodores would get the win on senior day 73-71. Kornet finished the game with 24 points, scoring 18 of them in the second half. KeVaughn Allen failed to score in the second half, so it was Barry leading the way with 15 points.

Dropped a close one today, but it came down to the very last play! All the highlights from Vanderbilt! pic.twitter.com/l47GPAIbqn

With the regular season officially over for both teams, it’s time to look ahead at the SEC Tournament. The Gators clinched the #2 seed in the tournament with their win earlier this week versus Arkansas. With that, the Gators will have a double-bye and won’t play until Friday, March 10 at 7p.m. For Vanderbilt, they will be the #6 seed and will play their first tournament game on Thursday, March 9 at 6:25.p.m.