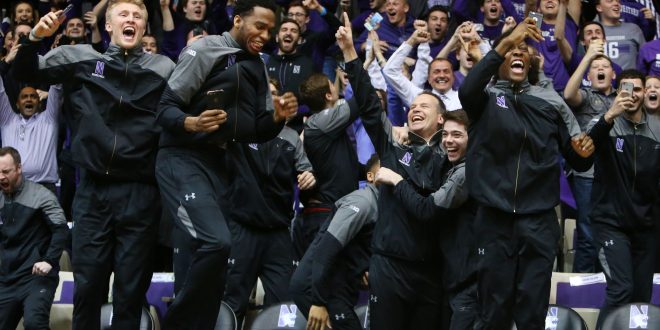 Mar 12, 2017; Evanston, IL, USA; Northwestern Wildcats head coach Chris Collins celebrates with his team after being selected as the number eight seed in the west region of the NCAA Tournament during a selection Sunday watch party at Welsh-Ryan Arena. Northwestern was selected to their first ever NCAA Tournament. Mandatory Credit: Jerry Lai-USA TODAY Sports

For the first time in school history the Northwestern Wildcats (23-11) have clinched an NCAA playoff berth. The team is ranked eighth in the NCAA tournament and will take on ninth ranked Vanderbilt, who is lethal from behind the arch.

Why They Are Here

The Wildcats are led by upperclassmen guards Bryant McIntosh and Scottie Lindsey. Both are averaging 14 points a game. These two have helped build the program from their first day. Coming in as freshmen during head coach Chris Collins’ first year, the team showed tremendous progress and hasn’t looked back since.

Not to mention, sophomore Dererk Pardon has also had positive contributions to the team. The six-foot-eight-inch center grabs eight rebounds per game and stays consistent, scoring eight points a game. Pardon leads the Wildcats in shooting percentage with 60 percent from the field. The Wildcats finished with their best record ever during the 2016-2017 season, with 23 wins that helped propel them into their first tournament appearance in program history.

Coach Collins said that although tomorrow will be a difficult matchup for his team, they have had time to come down after all the hype and prepare for Vanderbilt. He said that the team is well aware that they will have to play their best basketball because this is the time that other teams are giving their all.

In his fourth season with the Wildcats, coach Collins has shown the significant progress his team has made. Coach Collins has finished each of his seasons with a better record than the season before, with this year being the most notable. The Wildcats finished the regular season with 23 wins and ranked sixth in the Big 10 conference.

Coach Collins’ resume and continued success has led him to be a contender for the Naismith Coach of the year Award. He is a finalist among three other notable head coaches in Mark Few, Jay Wright, and Bill Self.

BIG NEWS to start your day: @coach_collins is a finalist for @NaismithTrophy Coach of the Year! #B1GCats

Inexperienced team and all, the Wildcats will look to have their first win the tournament under their belts. 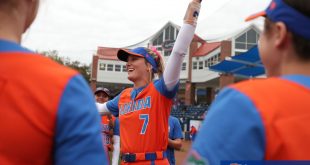