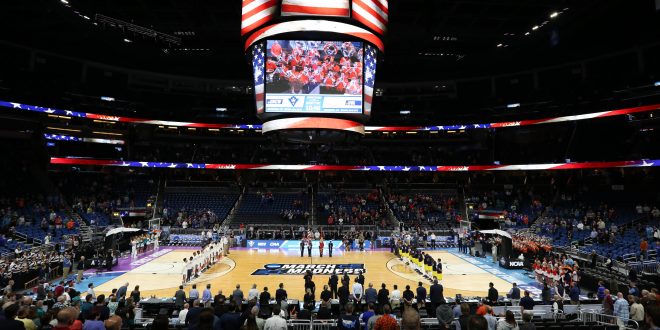 Mar 16, 2017; Orlando, FL, USA; General view of the National Anthem prior to the game between the Virginia Cavaliers and the North Carolina-Wilmington Seahawks in the first round of the NCAA Tournament at Amway Center. Mandatory Credit: Kim Klement-USA TODAY Sports

West Virginia and Bucknell get their big dance started today in Buffalo in a West Region match-up. The game will tip around 2:45 on CBS.

West Virginia comes into the NCAA Tournament battle-tested after finishing third overall in the Big 12.  The Mountaineers won some major games throughout the year, including wins over many other fellow tournament teams including Baylor, Kansas, Iowa State, Oklahoma State, and Kansas State.

West Virginia also made a deep run in their conference tournament before falling in the Big 12 Championship game to the Iowa State Cyclones by a score of 80-74.

At the helm of West Virginia is an NCAA legend, in the form of  head coach Bob Huggins.  This is the 22nd time that Bob Huggins has lead a team to the NCAA Tournament, but he has still yet to come away with a title.  If the Mountaineers wish to have a chance at the title this year, they first have to get past 13th seeded Bucknell.

The Bucknell Bison ended their 2016-2017 season on a six game winning streak.  They concluded their regular season with a Patriot League Championship to earn an automatic qualifying bid into the NCAA Tournament.

Last year, the 13 seed was able to spring one upset when Hawaii defeated Cal 77-66.  Throughout the years, a 13 seed has upset a four seed 26 times.

If Bucknell wishes to become the 27th team to spring the 13-over-4 upset, taking care of the ball is going to be their biggest priority.  West Virginia is known for their full court pressure.  They force opponents to commit an astounding 20 turnovers per game.  This pressure, as head coach Bob Huggins points out, is key to West Virginia’s success as it allows the Mountaineers to get quick easy baskets, while keeping major pressure on their opponents.  Taking care of the basketball is the only way Bucknell has a chance to stay in today’s game.

Focus is going to be key for West Virginia today as they look to make a deeper run in the tournament then they did last year. Last year the Mountaineers made it to the tournament as a 3 seed before they were upset in the first round by 14 seed SF Austin.  Bob Huggins was clear that he felt his team overlooked the SFA Lumberjacks last year.  The Mountaineers need to be more focused this year if they wish to make it to the second round.

The winner of today’s game will face the winner of Notre Dame and Princeton in the second round.