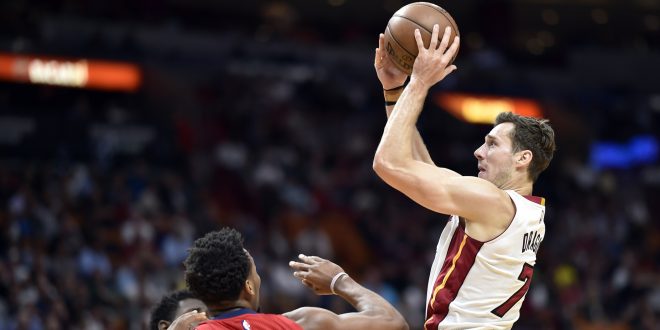 Last night, the Miami Heat defeated the New Orleans Pelicans 120-112. The game marked Goran Dragic’s return from the eye injury he received previously against the Toronto Raptors. Dragic doesn’t seem to have missed a beat however, leading his team with 33 points. The game was a high scoring affair that was fairly close throughout, with Miami only leading 54-52 at the half.

From the start to the end of the 3rd quarter, Dragic was on fire, putting up 16 of his 33 points. It was a great display of Dragic’s ball handling skills, crossing defenders with spins and fakes and deep-three pull ups. Dragic shot over 50 percent from three, helped by Hassan Whiteside’s “dunkability” that gave Dragic the open looks. The two were working well off of each other,using Dragic’s ability to finesse to keep defenders on their toes and Whiteside flourishing with his ability to finish. The Miami Heat as a whole have been on a roll lately and don’t show any sign of slowing down.

It was everything but a one-sided game. Anthony Davis of the Pelicans was hot coming off of a minor ankle injury, leading his team with 27 points. Pelicans fans should be a little worried about Demarcus Cousins, earning his 19th technical foul of the season after shoving Heat center Willie Reed. One more technical foul for Cousins and that will be another one game suspension. Cousins currently leads the league in technical fouls.

For the Miami Heat, they’ll look to continue the streak they have been on, winning 22 of their last 27 games. Miami’s next game will be tomorrow  against the Minnesota Timberwolves. The game will be in the American Airlines Arena with tipoff set for 8 p.m. For the New Orleans Pelicans, the next game is tomorrow in the Smoothie King Center against the Houston Rockets.