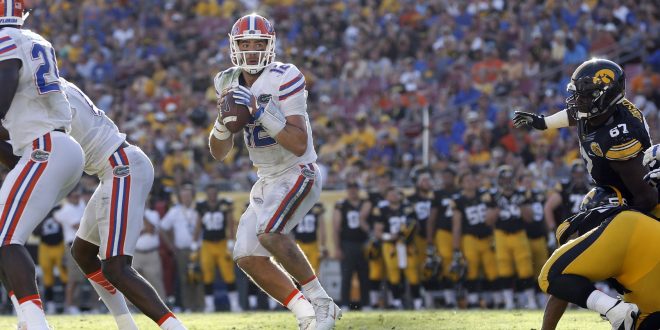 Austin Appleby Pro Day and Discussions about the Future

All 32 NFL teams sent scouts to The University of Florida on Tuesday, March 28th for Pro Day. Austin Appleby was the only quarterback to participate. Appleby was not called up for the NFL Combine, or the Senior Bowl, and so Pro Day was his opportunity to prove his worth.

Appleby discussed what he wanted to showcase on Pro Day. When asked about last season and what Appleby thinks the Gators need to work on moving forward, his answer was spot on. He is looking forward to the new season as “everyone is becoming upperclassmen for the most part. And now it’s time to turn over and play like veterans.” With new talent coming into the team as well, the veteran players will have to step up to keep their role in the team. Appleby also complimented the red shirt freshman quarterbacks and their throwing ability. However, he mentioned there’s more to being a quarterback than having a good arm. Appleby said this about his teammates’ red-shirt season.

While not starting much last season, Appleby became a leader for this Florida Gator football team. He lives with fellow quarterback Feleipe Franks and is always willing to answer any questions he has. Appleby was happy with his performance and his teammates’ performance as well on Pro Day.

Previous Gainesville the Host for Pepsi Florida Relays
Next Ivie the Underdog: Can Joey Ivie Actually Make it in the NFL?