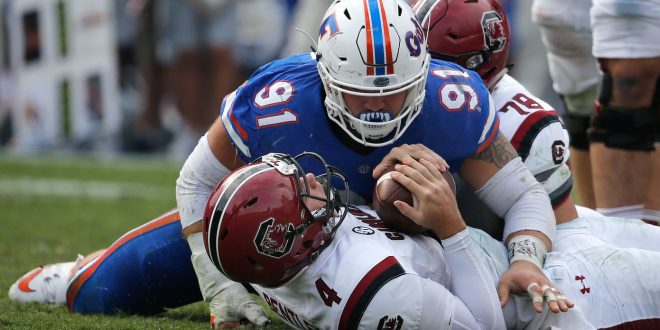 Ivie the Underdog: Can Joey Ivie Actually Make it in the NFL?

Joey Ivie has had to overcome more than one could imagine over the past two years. In April of 2015, his sister was killed in a car accident, and Joey was the one holding her when she took her last breath. Joey was more of a father-figure to his sister, Jordan, so he took this loss harder than anyone. When her name was called at graduation a month later, Joey was the one who walked across the stage to accept her diploma. Joey’s motivation is Jordan. His attempt to play in the NFL is solely for Jordan, and just like Ivie’s Twitter bio says, he is an “underdog.”

While Ivie didn’t have the most illustrious career at Florida, he was undoubtedly a difference maker. During his senior season, he made 26 tackles, 3.5 tackles for loss, 2.5 sacks, 6.0 quarterback hurries, a forced fumble and a blocked kick, all while battling through a nagging thumb injury.

At Florida’s pro day, Ivie put up some relatively impressive stats. He ran his 40-yard dash in 4.97 seconds, bench-pressed 225 pounds 26 times, had a 29.5 inch vertical and ran a 20-yard shuttle in 4.50 seconds. Even though he wasn’t invited to the 2017 NFL Combine, this would have put Ivie right in the middle of just about every category for defensive tackles.

The 6’3″, 301 pounder will be drafted very late, if he’s even drafted at all. However, the Dade City, Florida product is confident that he will be selected by an NFL franchise.

Here’s what NFL.com had to say about Ivie:

“Plays with good motor and energy throughout the snap. Plays with flexibility and desired athleticism on the move. Punches into blockers with good placement. Locates the ball quickly and works off his block to tackle. Active as a pass rusher attacking both shoulders of the blocker. Plays with quick hands in his rush and uses arm over to get over the top.”

However, Ivie’s weaknesses are pretty obvious. He isn’t too strong in the lower half of his body, so he loses balance occasionally while making contact. He has a plethora of trouble handling double teams and combination blocks. Ivie also relies more on his motor and drive rather than power and explosiveness, which is a huge necessity on the NFL level.

If Ivie can add ten pounds of muscle while continuing to work on his footwork and technique, there’s no reason why this “underdog” can’t have a long, solid career in the NFL.

Over the next month, the NFL hopeful plans to train hard, focus on his weaknesses and boost his draft stock before the NFL Draft kicks off on April 27th.