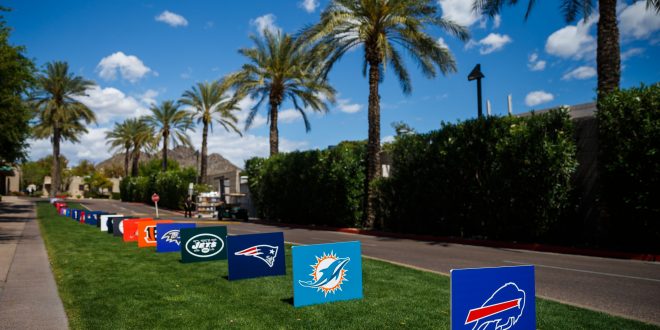 The NFL schedule for 2017 is officially here. What does 2017 mean for Florida’s teams? We take a look at each team from the Sunshine State’s schedule and break it down.

Firstly, we take a look at the Jacksonville Jaguars. Now looking at a new head coach in Doug Marrone, 2017 looks to be in favor of the Jags. According to the NFL Strength of Schedule rankings, provided by ESPN, the Jags have the tie for the second-easiest schedule in the NFL.

They commence their 2017 on the road against the Houston Texans on Sept. 10 at 1:00PM, then host their division rivals Tennessee Titans on Sept. 17. Their schedule includes notable games against Baltimore, Pittsburgh, Arizona and Seattle.

The team is looking to first-round draft pick QB Blake Bortles and Doug Marrone to lead the playoff march and rule the AFC South.

Their schedule will have them represent the AFC South against the NFC North, AFC West and their rivals in the AFC South. The Jags will not see their bye week until week eight, with their return coming against the Cincinnati Bengals at Jacksonville on Nov. 5.

After a disappointing 4-12 season, the Jaguars are looking for supremacy in the AFC South and stamp their ticket to a playoff run in 2017. They have 16 games to prove that they are ready and will surely be tested with their schedule.

Secondly, we shift to the Tampa Bay Buccaneers. Tampa Bay hopes that 2017 won’t see them once again left out of playoffs after 2016 would leave it up to chance. Their schedule ranks as the no. 14 hardest in the league.

WATCH >> @ScottSBucs and @bucinsider break down the Buccaneers' 2017 Schedule on Bucs Insider, presented by @MillerLite! pic.twitter.com/CfwQjJ1uLz

The Bucs will begin their 2017 in Florida against the Miami Dolphins to start their 2017 season on Sept. 10 from Hard Rock Stadium in Miami. This jump starts their 2017 campaign, which will include home games against the Giants, Lions and their NFC South division games. Not only will Tampa Bay be the feature of this year’s “Hard Knocks”, but will also have the spotlight in two prime time games.

They are looking at third-year QB Jameis Winston to lead the charge under the bright lights as they host the AFC East’s New England Patriots on Oct. 5 for Sunday Night Football and NFC South rival Atlanta Falcons on Dec. 18 for Monday Night Football.

The Buccaneers are looking for one thing in 2017: respect. They are hoping that “Famous Jameis” can take them through their schedule and nab a postseason appearance in 2017.

FInally, we look at the Miami Dolphins‘ schedule. The story of the Dolphins’ miracle 2016 is one that nobody saw coming. With fifth-year QB Ryan Tannehill making his return from injury, the team faces the sixth-hardest schedule in 2017. Featuring four prime-time games, that is just the start for the team’s challenges in 2017.

Their battle against Tampa Bay at home kicks off their season in hopes of returning to the playoffs. The team faces an 11-week run before their bye, which includes a trip across the pond to face the New Orleans Saints in an AFC East vs. NFC South showdown. Another notable game in their schedule is arguably their biggest non-divisional test in 2017: a week six road game against the Atlanta Falcons on Oct. 15.

The Dolphins also get to play on prime time as they host the Super Bowl LI Champions New England Patriots on Monday Night Football in week 12. This game will follow the Dolphins’ bye-week and serve as a test on where they stand in the AFC East. Other prime time games for Miami include a Sunday night battle against Oakland at home and a Thursday Night Football showdown against the Baltimore Ravens in week eight [Oct. 26].

For Miami, it’s about getting back into playoffs and proving that their no longer under the shadow of the Patriots. With a challenging schedule, a proven coaching staff and a returning QB, Miami wants to make 2017 their year.

As the NFL season looms closer, everyone is just anxiously awaiting for some football. Follow the Jaguars, Buccaneers and Dolphins on Twitter and stick with us right here at ESPN Gainesville for more updates.

The NFL’s 2017 season begins on Sept. 7 with the Kansas City Chiefs going toe-to-toe with the New England Patriots. That game will be a Thursday Night Football game live on the NFL Network.