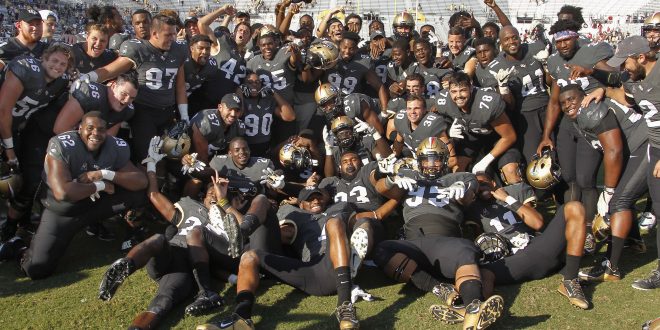 The University of Central Florida Knights are ready to take the field for their 2017 spring game. After a healthy set of spring practices, head coach Scott Frost feels his team is ready to show all they have to offer this season and the improvements this program has made.

The Knights held an overall record of 6-7 in the 2016 season. The team ranked third in the American East. They were 4-4 in conference play. This record shows much improvement for this program, as they lost every game in 2015 for an 0-12 record. However, UCF has seen a lot of growth and improvement since that season, which can be seen from their much improved record in 2016. They were also bowl-eligible last season.

Head coach Scott Frost says he is looking for two things from this weekend’s spring game: competition and enthusiasm. The Knights have not suffered any major injuries this spring. Frost says he feels the team and the program have made big improvements and is excited about the spring that they have had. Senior linebacker Shaquem Griffin says the fact that he is healthy and will be able to play is a blessing. He also described what a joyful experience he feels the spring game will be, and says he is ready to show what he’s got.

The UCF spring game will be Saturday at 6:30. The Knights will kick off their season in the fall on September 2 against FIU.

Born and raised at the ballpark! Typically quiet- until it comes to sports. I'm a South Florida native with a passion for baseball nearly as strong as my faith. Grew up in garnet + gold, turned out sporting orange + blue. Likely to be found with a camera. And yes, I take food pictures.
@victoriarossman
Previous Florida’s Women’s Tennis Competes in SEC Tournament
Next The King, The Greek Freak and The Grit and Grind