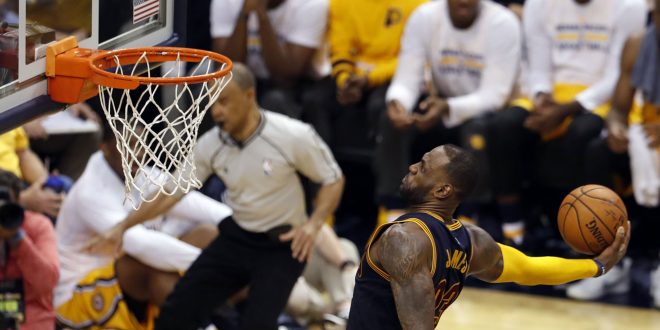 The King, The Greek Freak and The Grit and Grind

The first Thursday night of the NBA Playoffs is on the books. It left us with amazing performances and surprising results. LeBron James led the way for the Cleveland Cavaliers to come back from a 25-point deficit at halftime to beat the Indiana Pacers. Giannis Antetokounmpo and his Milwaukee Bucks outplayed the Toronto Raptors at their home court. The Memphis Grizzlies stunned the San Antonio Spurs at home with an impressive defensive performance.

A King On A Mission

Coming to this series there was a lot of excitement about LeBron-Paul George Part IV. Both James and Paul George had one of their best playoff performances of their careers; a game that will be remembered by the impressive 25-point comeback and their one-on-one matchup. James’s well-rounded performance was not only about getting a triple-double (41 points, 13 rebounds, 12 assists), but for the variety of his offensive approaches. Knowing that he is a perennial force inside the paint, James did not hesitate to do his typical locomotive-ish drives to the basket. Defenders struggled every time they tried to stop him on transition. James was also very effective from the perimeter. He made six of his 12 three-point attempts.

George did everything that he could to keep the Pacers in contention throughout the whole game. He looked very impressive when creating shots for himself; the only problem is that the Cavs found the way to stop him and force him to shoot just 35.7 percent from the field.   Still, George had 36 points, 15 rebounds and nine assists. Thirteen of those 15 rebounds were on the defensive end. Something that explains the lack of commitment that the rest of Pacer players had on the defensive boards. Myles Turner, who is the starting center of the team, had the second most rebounds of his team on the night with just four. Now the Pacers are down 3-0 in the series. Game 4 will be on Sunday at 1 p.m., ET.

The Greek Is Freakily Good

The Bucks surprised the Raptors with an astonishing defensive performance. Milwaukee held Toronto to 77 points. The Raptors could not deal with the zone and perimeter defense by the Bucks. DeMar DeRozan had a forgettable 0-for-8 night on the offensive end, and Milwaukee’s Giannnis Antetokounmpo did a fantastic job at stopping every player who tried to get shots on the low-post or inside the paint. Malcolm Brogdon, the Bucks rookie sensation, had an stellar night at distributing the ball to his teammates. He showed maturity when running the offense,delivering nine dimes.

It seemed like the Raptors found the rhythm after a solid 106-100 win on Game 2. But the Bucks not only neutralized Toronto’s dynamic backcourt, but also their two key-role players. Serge Ibaka and P.J. Tucker could not put a stop to Antetokounmpo and Khris Middleton either inside the paint or from the perimeter. Game 4 will be on Saturday at 4 p.m., ET.

“Grit And Grind” Vibes At Memphis

After being outscored by 43 points in the first two games of the series combined, the Grizzlies played a well rounded game against the Spurs. Mike Conley went for 24 points in just 13 field-goal attempts. He orchestrated the offense very well; his pick-and-roll plays with Marc Gasol, Zach Randolph and JaMychal Green did a lot of damage to the Spurs’s zone defense. Grizzlies fans were constantly cheering for Randolph, the 35 year old who played like a 25 year old on this night. He dominated the low-post, dragged rivals, created open spaces and showed fantastic anticipation and concentration when making the switchings on defense.

Tony Parker struggled throughout the whole game to find his offensive rhythm. He had an 0-for-4 night for the Spurs, forcing the team to give more minutes to Patty Mills. Mills did what he could to contend with Conley on both ends. Kawhi Leonard and LaMarcus Aldridge were the only offensive forces for the Spurs in this game. Both players scored 34 points combined. Game 4 will be on Saturday at 8 p.m., ET.