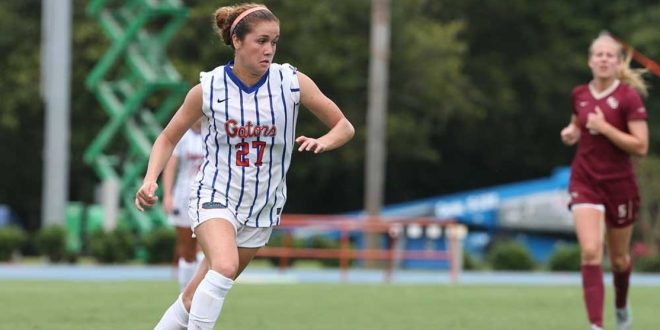 The Florida Gators soccer team once again reigns atop the SEC. The team is coming off a 12th SEC Championship overtime 2-1 victory last November against Arkansas. One very important key to the team’s success is midfielder Mayra Pelayo. The rising junior is a key figure for the team both on and off the field.

Pelayo recently got to sit down with ESPN Gainesville to discuss a plethora of topics.

Three Gator stars would represent the school at the U.S. Under-23 National Soccer Team camp in 2017.

Mayra would be one of three players selected. However, she would be forced to skip the camp this year due to a minor injury.

Mayra is currently dealing with a minor hip injury from a side tackle during the first half of the Orlando Pride game. In the interview, she breaks down how it happened, as well as the prognosis of her injury.

“Orlando Pride, first half, I just side tackled Ali Krieger and my hip kind of popped. It’s not an injury where I’m out for a while, but just where I take a week or two off to recover,” said Pelayo.

She also states that overcoming this minor injury is simply a matter of taking the time to heal and recover from the injury to come back soon and get back on the field for the Gators.

The Gators soccer team would go on to lose that game 3-0 against the Orlando Pride of the NWSL.

Thanks @ORLPride – best of luck in @NWSL action!#Gators finish spring Friday vs. US U-19 in Winter Springs pic.twitter.com/H4EoSex9Eu

For the Gators and Pelayo, the loss comes with a positive as they gain experience and a blueprint with how to go into the 2017 season.

Mayra not only attributes her success to her work ethic, but to a few girls on the team who influence her to be her best. She credits some players to helping inspire her to be the best player possible and have highlight-reel scores for the Gators. She talks about being close to senior MF Meggie Dougherty Howard and what makes her an influence.

“Her ability, work ethic and leadership in the team inspire me. We’re still really good friends and we still talk,” states Pelayo.

The influence that Howard has had on Pelayo can be seen in her total career stats during her time on the Florida Gators soccer team, with a few notable ones being:

Pelayo is hoping to become the type of player that Meggie was for her and use that continued inspiration and influence to continue bolstering her career stats at Florida.

Winning the SEC Title for Florida

2016 will be remembered for Mayra as bringing home the 12th SEC Championship in the program’s history. Pelayo is one of the key contributors in the Gator victory against Arkansas. She is responsible for putting up two shots with one on-target, according to the box score.

The feeling of being on the field, knowing you’re moments away from winning a title, is one you can’t describe.

During the interview, Mayra describes to us what it’s like to be on the field in the closing moments of being the SEC Champions for the 2016 season.

“Just to come up with the win and get that championship, it was great,” said Pelayo.

One other point that was brought up was the struggle they started off with against other teams.

“I just remember we played a lot of teams that we were struggling with in the regular season,” continued Pelayo.

The feeling in Alabama on Nov. 6, 2016, is one that will never be forgotten for Mayra and the rest of the team. The excitement could be felt not just with Mayra, but across the whole team.

“I felt like we were all just so excited and everyone just put their all into every game and we came out with the championship, which was really great,” said Mayra.

The excitement would be spread across the whole team, but she recounts how she felt during the last minute of the game.

“We knew one of the seniors would have made a big difference in the game too, so it was an amazing feeling,” said Pelayo.

For Mayra, this win was big for her as it was her second championship, which meant a lot to her, personally.

One thing most athletes think about is the legacy they leave behind. Mayra wants her legacy to be one that people can use as inspiration to work hard and be a good person. In the interview, it’s not about her statistics that define her legacy, but her ethic on and off the field. 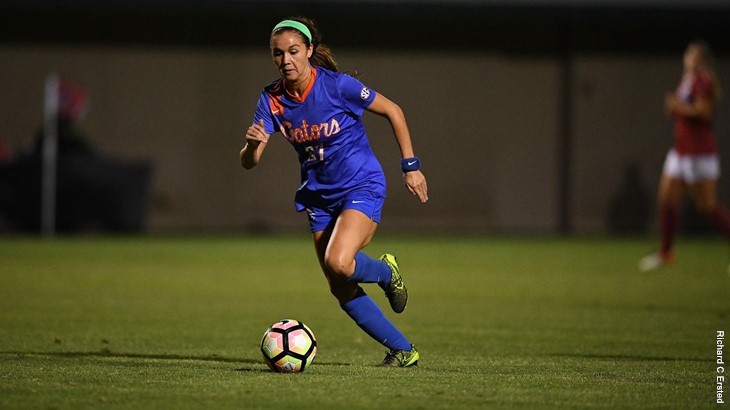 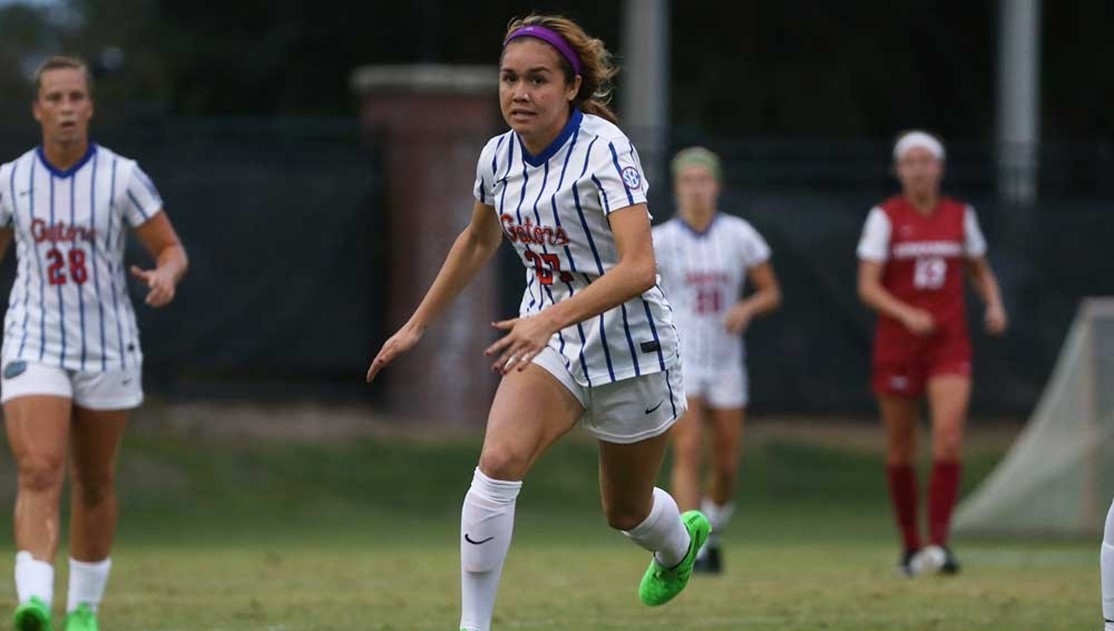 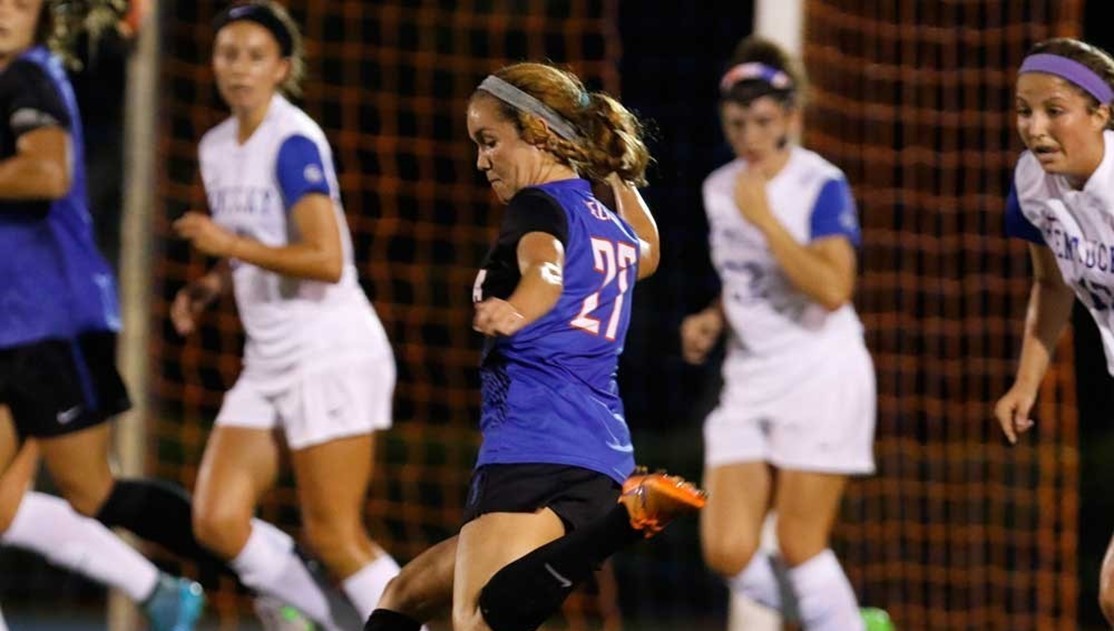 For Mayra, it’s not about being remembered by the number of championships she has or by the extracurricular awards under her belt.

“I just feel like I hope to be remembered as someone who works really hard and takes each game not for granted and puts everything into one game at a time,” said Pelayo.

“I also hope to be remembered by my skills, my footwork and just making my teammates better cause that’s my goal. I don’t wanna be the selfish person that does everything. I want to make the team better, help my teammates out while making them look better, too,” continued Pelayo.

Finally, the 2017 season is rapidly approaching. Pelayo and the Gators aim to bring SEC Championship number 13 back to Gainesville. This year, however, their sights are set on avenging the NCAA Soccer Championship loss vs. Auburn from November. They look to bring the trophy to the Gator Nation and show that they are, indeed, the best in the country.

The Florida Gators soccer season begins on Aug. 18 when the visit Florida Atlantic. The road to a championship begins with the offseason training. Mayra and the team are looking to recreate the SEC Championship moment from 2016 and create a bigger one in 2017.