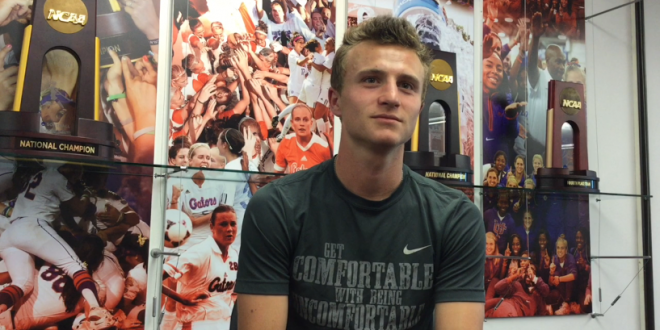 FEATURE: From Cornfields to Swamps

Just over 1,200 miles separate Cedar Falls, Iowa, from Gainesville, Fla. For some, that distance doesn’t mean much; but for Gator track and field runner Sam Ahrenholz, this length marks the completion of a dream to a reality.

The journey of 21-year-old Ahrenholz has been nothing short of incredible. Born and raised in Cedar Falls, Iowa, his passion for the state has never ceased. But while the love of his homeland has always been a driving force, his passion is rooted in other areas as well.

Growing up, Ahrenholz played many sports. Whether it be football, basketball, baseball, and even wrestling, he was always up for a challenge. If there was competition involved, he was sure to be included.

He began running track in the seventh grade at Holmes Junior High School. At the time, little did he know this sport would allow him to attend the school of his dreams – the University of Florida. Young Ahrenholz grew up idolizing former Florida quarterback Tim Tebow, spurring him to become a lifelong Gator fan.

However, his road to the university didn’t come without bumps.

Though he continued to play multiple sports in high school, Ahrenholz would improve greatly on the track. By the time he reached his senior year at Cedar Falls High School (CFHS), colleges were starting to gain interest in him. The future was bright.

At the 2014 Iowa State Track and Field Championships, Ahrenholz would participate in the 800 meter run and the 4×400 meter relay. It would be his final opportunity to run for CFHS, as well as his last chance to impress college scouts.

After jumping out to a lead during the first part of the 800 meter run, Ahrenholz would lose his footing and tumble to the ground. His hopes of winning an individual state title would be wiped away instantly, finishing in last place.

Despite the disappointing and unfortunate finish, there was little time to contemplate. Ahrenholz would need to dust off the loss and lead his team in the 4×400 meter relay – and he did just that.

With the help of teammates Hunter Lavallee, Zach Shippy and Steven Thompson, Cedar Falls would clock in at 3:18.30, clinching a state championship.

With the victory under his belt, the pain from the 800 meter loss seemed all but gone. Yet, a few hours later, circumstances would change. Ahrenholz would be notified that no schools were interested in offering him a scholarship, leaving him uncertain of the future. He would have to remain faithful and trust the process.

Following graduation from CFHS, Ahrenholz would enroll at Iowa State University in the fall of 2014. Although attending as a regular student, he wouldn’t give up his dream of running track in college. He continued to train every day, often wearing a Gator shirt as motivation. His former head coach at CFHS, Dirk Homewood, would even write him workout plans and coach him along the way. He was determined to work hard, in hope of being noticed.

Finally, Ahrenholz would get an opportunity to showcase his skills at a USA Track and Field event during the summer of 2015. He would compete in the 800 meter run, timing in at 1:52.7 – a personal best. His emphatic time would catch the attention of college coaches. He would even receive a scholarship offer from his current school, Iowa State. Everything was starting to come together.

While attending classes at Iowa State during the beginning of the Fall 2015 semester, Ahrenholz would receive an email from an assistant coach on the University of Florida track and field team. The coaching staff took notice of his speedy times and offered him an opportunity to join the Gators. It was an offer he couldn’t refuse.

Chase your dreams and trust God. Happy to announce I've accepted a scholarship to my lifelong dream school #GoGators pic.twitter.com/rXLjXHXQfz

He would pack his bags and head south.

Ahrenholz arrived on campus in January of 2016. After an improbable route from the cornfields of Iowa, the redshirt sophomore has appreciated every minute in Gainesville. Teammate Mac Macoy says that his journey has been inspiring.

After completing this season, Ahrenholz will have two more years of eligibility. With his remaining time, he hopes to help his team out in any way that he can. Whether it be at the SEC Championships, or possibly the NCAA Championships, he plans on giving everything he has on the track.

The path he took certainly wasn’t easy, but it sure was rewarding. Though faced with adversity on many occasions, he would continue to persevere and pursue a dream he had ever since he was little. His journey goes to show that hard work truly does pay off.

If you have a dream, never stop chasing it.